Knights shine on court, in sand

Andrew aims for collegiate future in the sand

Sophomore Gella Andrew was 13 years old when she began beach volleyball, a sport that has since become a passion.

“My friends were doing it, and I was like, ‘I should try it out!’ Then I really fell in love with it and now it’s just gone uphill from there.”

I was at a [beach volleyball] tournament in Austin, and it was raining so hard, but we still had to play through it. It was kind of miserable, but it was worth it.”

Last year, making varsity in McCallum volleyball as a freshman was an exciting experience for Andrew. The love for her teammates and the Mac volleyball program made it difficult to decide to leave her spot on the team as a middle blocker/hitter and pursue beach volleyball exclusively.

“I really do want to play only beach volleyball in college, so I wanted to focus on that the most, but it was super sad,” Andrew said. “However, I love that I can still be in the class and support the girls.”

Andrew spends her time in the Mac volleyball class practicing and helping out with things like running drills.

As a freshman, Andrew struggled with the difficulties of balancing both beach and indoor volleyball at the same time, often having practices for both on the same day. She says the strong bond she held with her teammates made the experience worth it. Andrew notes, however, that even focusing on just one sport still requires a lot of practice.

“During the [beach volleyball] season I do three practices for two hours a week then I do an hour of weightlifting three days a week,” Andrew said.

While the two sports may be similar, there are more differences between them than one might think. The biggest difference is that indoor volleyball has six players on the court at a time while beach volleyball has two players covering every position throughout the game.

“I like how you get to do all the skills instead of one specialized position,” Andrew said. “You get to be everything.”

An additional component that makes the game fun but also exceedingly difficult is the weather in Texas.

“Playing in Texas, we have such unpredictable weather. It can be really cold, or hot, rainy, snowy, and it’s really hard to run and jump in the sand and to execute every skill,” Andrew said. “I was at a tournament in Austin, and it was raining so hard, but we still had to play through it. It was kind of miserable, but it was worth it.”

Driven by an aspiration to play for USC, Andrew has already begun traveling to play for out-of-state tournaments, nationals and college team camps in Texas, Florida and California. While Andrew has set her sights high, she’s also inspired by other high achievers in the sport.

“I really look up to the U.S. Olympians April Ross and Alix Klienmen because they’re so good at working together on the court and being super clean with their playing style,” she said.

Attempting to get recruited for college teams, Andrew has been emailing coaches with updates and film for the past year; and she will be able to start directly communicating with them next summer.

The long-term goal is to continue playing a sport that has been in her blood since she first discovered it.

“I really loved it ever since I started,” she said. “It’s so competitive and challenging, such a mental game.” 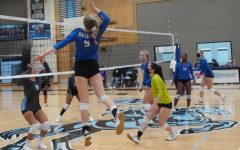 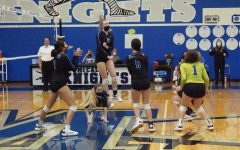 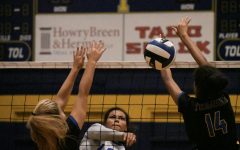 Head coach Amy Brodbeck calls senior Grace Werkenthin the “connoisseur” of the volleyball team. As a veteran senior on a young team, Werkenthin’s experience has allowed her to blossom into a captain and a leader in her final season of high school volleyball.

The road to Werkenthin’s senior season wasn’t easy. Just like many other sports, COVID hit the volleyball program hard.

In some ways, I think [having to wear masks last year] made us a lot stronger this year because now we can stay on the court longer and keep playing without getting tired.”

Normally, the team would use the spring semester to build relationships and sharpen skills during the off-season. The sudden pandemic made this near impossible.
The dedication of the team overcame this hardship, however, as small groups of players came in for off-season training anyway, while others trained through their club teams.

According to Werkenthin, COVID ironically might have helped the team not hurt it.

“When COVID hit, I think the biggest thing was masks,” she said. “Running around the court and not being able to take it off just became a lot more tiring. We had to work a lot on our endurance because of it. In some ways, I think it made us a lot stronger this year because now we can stay on the court longer and keep playing without getting tired.”

This year’s team was nothing short of a rebuild. The senior-heavy roster of a year ago has yielded center stage to the next generation of varsity volleyball players.

Werekenthin and the four other seniors have risen to the task of leading this young team. In order to become a more effective team leader, Werkenthin switched her position from outside hitter to right side hitter and improved her passing in order to play all positions on the court.

“It’s definitely been a lot of stepping into leadership because last year’s team had two seniors who led the team and did most of that stuff,” Werkenthin said. “We’ve had to do things like learning to be patient with the new team and just picking up more skills on the back row.”

I’m pretty sure that I’m not going to play in college, but if an offer comes up from a smaller school that I enjoy I could potentially still go.”

The team has had their fair share of struggles early on in the season. Heading into district play with a losing record was not the way they wanted to start the year, but the girls have picked up steam in district play. Currently, the team is 12-3 and in second place after a 3-0 victory at Ann Richards that completed a season sweep of last year’s district champions. The win extended the team’s win streak to four matches. The team has won nine of their last 10 matches, heading into its regular season finale, a Senior Night showdown at home against the LASA Raptors tonight.

For Werkenthin, senior year might just be her last time playing volleyball competitively, and she wants to make the best of it.

“I’m pretty sure that I’m not going to play in college, but if an offer comes up from a smaller school that I enjoy I could potentially still go,” she said.

Regardless of her volleyball future, she cherishes her time playing at Mac.

“My favorite memory is probably just playing with some of my best friends and being able to have them by my side cheering me on during games,” she said.
Werkenthin and her teamates still have a lot of volleyball to play this year … in the regular season and hopefully beyond it.