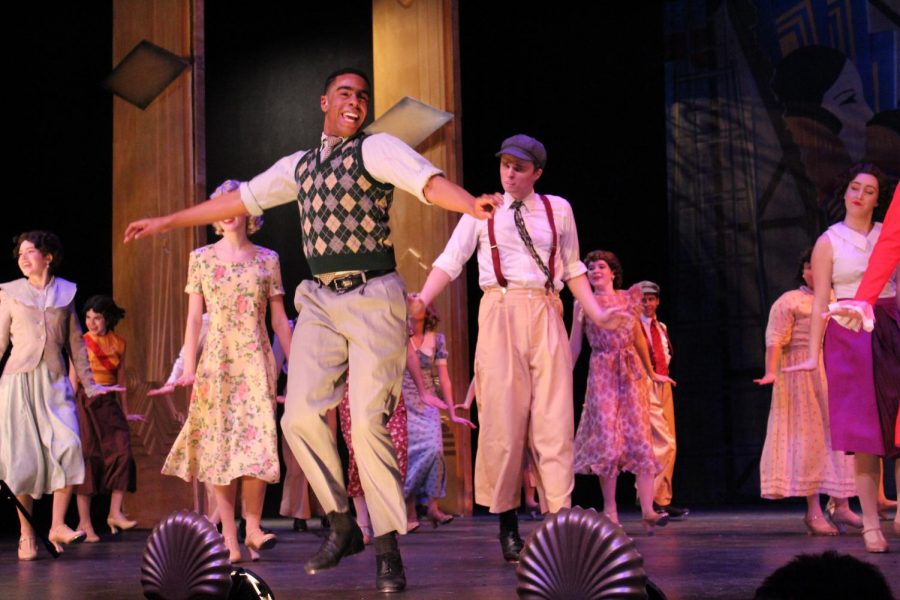 Scales front and center in the first act of “42nd Street.” Photo by Annabel Winter.

Characters in '42nd Street' dance to survive, which made staging show an exhausting, exhilarating experience

The Shield: So seeing all the angst, hard work and lost sleep that led up to it, was 42nd Street worth all of it?

Owen: Whenever we were onstage, I literally couldn’t remember all the blisters and pains of the rehearsal process, which I think is so funny. So in the moment, yeah, it definitely was. But on paper, it may look completely irrational because I feel this show has had the most stressful process out of all MacTheatre. Yet in those seconds on stage–it’s a whole different story.

TS: Honestly, Owen you looked like you were having the time of your life on stage. So your answer seems right. What made this process more stressful than the other shows before it?

OS: Through the rehearsal process, I was told a lot, “Owen, you need to do this,” or “Owen, you need to do that, or else the show will suffer.” So having that weight on me really added to my fears and anxiety over the show. And I’m sure those people didn’t mean to add that kind of stress on me. I’m sure I was guilty of it, too, but 42nd Street is such an overwhelming show, and we all had high hopes for it, so we all got really caught up in the materialistic aspect of the production and almost forgot the joy of putting a show together.

Whenever we were onstage, I literally couldn’t remember all the blisters and pains of the rehearsal process.”

TS: It’s weird to hear you say that because … isn’t that what the show is all about?

OS: The materialistic aspect? Oh of course the show is extremely flashy, but I think the most important part for me is the story and what motivates the characters and what makes their world so flashy. Did I answer your question?

TS: Sort of. You said that you thought you all got so caught up in the material parts of the show that you forgot the joy of doing it. Seems to me that’s what 42nd Street is about. You think Helena’s character is going to lose her love of theatre or have her director rehearse it out of her and instead she reminds the director what is most important and he changes. It seems like you all were living what happens in the play.

OS: Oh YES YES! A few of us were talking about that today. We just realized we really pushed through. And I honestly, I’ve been training and performing for forever, and I’m not gonna let one little experience stop me or ruin my dreams. There are so many stories to be told and so many worlds to conquer.

TS: Wow. So has this been your best MacTheatre experience or your worst or both? 🙂

OS: Goodness ABSOLUTELY both! No doubt!

TS: What was your favorite part about it?

OS: I think my favorite part of the whole process were the bows, especially on nights when I was dripping in sweat, and I felt like there was nothing left in me to use. Also because I got to bow with Ava Grace Light-Wipple, and she and I were like two peas in a pod for the whole process.

42nd Street used dance as a way of surviving for the characters–it almost always came from a sense of joy. ”

TS: Excellent. Beyond being excellent dancers with commanding stage presence, what else do you and Ava Grace have in common that makes you say that?

OS: Our characters are always together throughout the show, so she was almost always my scene partner, and I’ve known Ava for like five years.

TS: Did you all go to the same middle school?

OS: No we did shows at KidsActing together throughout middle school.

TS: Oh. Stage siblings then. 🙂 I was wondering how you think the 42nd Street experience compared to the West Side Story experience?

OS: BAHAHAHA! Well, I personally don’t believe we, as a high school, should’ve done West Side Story because of the lack of diversity in our academy, even though I love the show and my classmates deeply. But, I, ummm, don’t know really how to compare the two because they are totally different shows, at least to me they are. I think West Side Story used dance as the primary resource to tell the story as authentically as possible, and 42nd Street used dance as a way of surviving for the characters–it almost always came from a sense of joy. But both shows did have a “If not today, then when?” type of theme.

TS: Dance as narrative device. Do you think the success of West Side made people more anxious about equaling or surpassing it this year?

OS: Oh I’m positive some our faculty heads were worried about the outcome of this show compared to last year. Every West Side Show was sold out, and it’s scary to match that, and we almost did. … I think😂

TS: I think that argument is sound in terms of buzz and box office. Can you talk a bit about what Ms. Nat brings to the table in terms of choreography and coaching the dancers?

OS: Ms. Nat loves 42nd Street so much, and the choreography is so iconic, so we used most of the original choreography with a dash of Ms. Nat’s flare. And she was kind enough to let me choreograph a number!

TS: Really? Which number? What was that experience like?

OS: I choreographed “Shuffle Off to Buffalo.” It was really cool actually, super fun.

TS: How much did you stick to the original choreography?

OS: I believe every number of the show was the original with minor tweaks except for “Shuffle off to Buffalo.”

TS: If I understand then, you were able to do your own thing with it? How did you go about choreographing it?

OS: Well, you have to stick to some kind of original of spacing and what will be on the stage so the choreo was something that would be recognizable for that number but also something from my own head.

I would tell lil Owen to fall in love with it more–the character, the show, etc., and again to take more things with a grain of salt.”

TS: What about it are you most proud of?

OS: I am most proud of the finale with staircase and the lights and the quick changes. I was a little worried on how that would turn out.

TS: It was pretty spectacular. I meant to ask what about your choreography made you most proud?

TS: Wait. You choreographed the number with the folks in pajamas on the train? That was awesome.

OS: Yeah, thank you so much!

TS: I was thinking about Cyrano this morning just I remembered that was the first Mac musical you were in. How do you think you have grown as a performer since then? What advice would you offer to that you?

TS: Owen, your answers and your patience have been awesome. Anything else our readers should know about 42nd Street before we close the book on it? 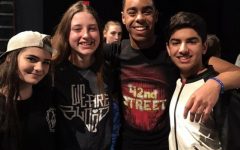 For senior Moore-Thoms, staging '42nd Street' stressful but 'so, so worth it' 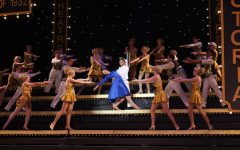 Going out youngsters, coming back stars 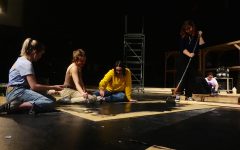 The show can't go on without them