Many people believe that teens aren't affected much if they contract the coronavirus. Two staff members can attest that that's a myth. 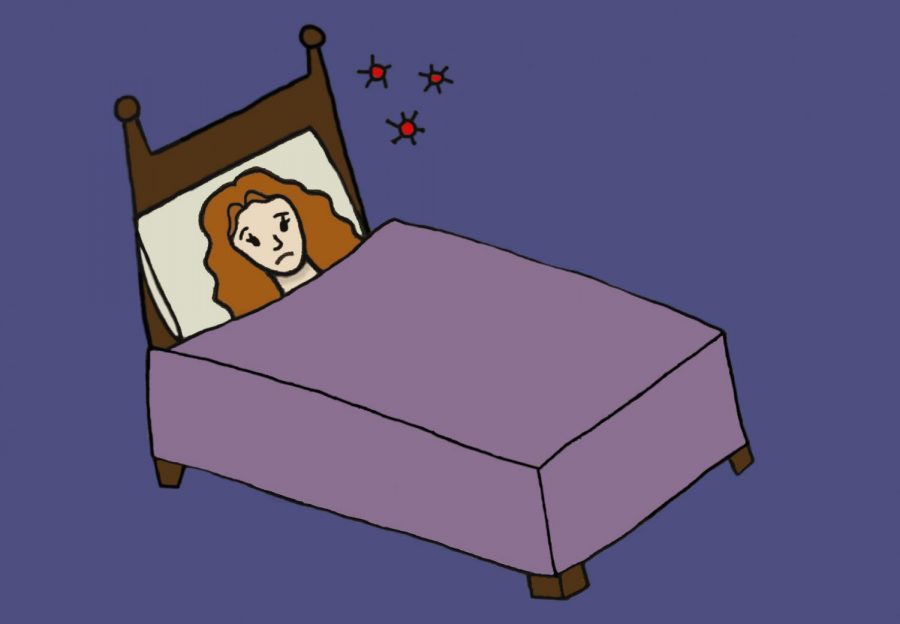 The hardest part of having COVID was the uncertainty of how long symptoms would last, when new symptoms might arise and when if ever I would feel completely normal.

As a teenager, I was told that COVID for me would be practically symptomless, but I can tell you now, that was not the case. Although I was never near the brink of death, there were times when it felt like the end of the world. Even with the number of COVID cases decreasing recently, the probability of catching the virus, even taking the safest and most socially-distant precautions, is higher than you might think.

The amount of mystery about the virus is unsettling while you’re infected. There’s no telling how long your symptoms will last, whether they’ll reappear in the future, or if some part of you is permanently damaged.”

In my case, it all started four days after getting my wisdom teeth removed, when I was delivered the news that my stepbrother, who was living in the house at the time, tested positive for COVID on New Year’s Eve. The last thing I wanted at that moment, at any moment really, was to catch the virus. I spent the next three days in bed recovering from my oral surgery, not knowing if I was infected or not.

Eventually, I had to go to an urgent care center for another complication, a staph/MRSA infection in my nose. Staph inside of the nose feels like a sharp rock stuck far up your nostril, except a little more dangerous. While I was there, they went ahead and did a rapid test for COVID, and shockingly, it came back positive. At this point, everyone who lives in my house was positive except for my younger sister, Chloe.
The day I tested positive was when I began to feel chills and pretty typical fever symptoms, but no actual fever. Also, I was still feeling a lot of pain and a little bit feverish from my wisdom teeth removal and staph infection, so it was hard to tell what was causing what.

As the days went by, I started to feel increasingly worse as more symptoms kicked in. From what I’ve heard, for most people, COVID feels pretty similar to the flu, and I can confirm this was true for me. I felt very lightheaded, weak and achy everywhere, I had very little strength or interest in getting out of bed. I was also taking strong antibiotics for my staph infection that made me feel like a giant wooden spoon was stirring up everything inside me, and just generally not helping.

About four days in, my flu-like symptoms started to fade away and now felt more like a cold, with incessant coughing and nose-blowing. Lucky for me, I never really had any lung issues or shortness of breath—the coughing stage didn’t last for long.

Then the fateful day came: the day I lost my taste and smell. I had heard it was frustrating and sad losing your senses of smell and taste, but I now truly know how important those senses are to living everyday life. Everything is bland, even chocolate tastes like nothing. I first found out I lost my sense of smell while I was petting my cat, who usually smells very strongly of old books, and found he had no smell at all. I then smelled all my candles and was amazed at how even the strongest smelling ones were completely scentless. I discovered my lack of taste as I ate throughout the day and just thought that everything was a little bland, mostly just tasting salty. I finally put it to the test by trying a very old pack of Fun Dip, which tasted like a flavorless, sugary powder that permanently dyed my mouth blue.

For many students like me who are split between two homes, the notion of “staying at home” is a little more complicated. … The risk of being exposed and exposing other people increases by a lot.”

As the days continued on, my other symptoms started to calm down. I only felt constantly tired, still longing for my senses of smell and taste to return. The amount of mystery about the virus is unsettling while you’re infected. There’s no telling how long your symptoms will last, whether they’ll reappear in the future, or if some part of you is permanently damaged. Almost a month later, I still experience exhaustion parallel to when I had mono a few years ago. My sense of smell and taste is somewhat back, but notes of things are still missing. My senses aren’t the same as they were before, and the possibility that they’ll never be the same again can’t be ruled out.

For many students like me who are split between two homes, the notion of “staying at home” is a little more complicated when you are switching back and forth between houses, oftentimes filled with many other people. The risk of being exposed and exposing other people increases by a lot. Luckily, I didn’t pass it on to anyone else to my knowledge, but I feel now especially is the hardest time for kids living in multiple households. This is a time of feeling like there are many things out of your control.

When I talked to the nurse in the urgent care clinic, she assured me that I practically wouldn’t even notice I was sick. Even though I was in a lower-risk age group, it was interesting to see that my mother and I were pretty much in sync as far as symptoms go, even though we both had mild cases.

Many people probably picture big gatherings of teenagers wildly passing COVID from one person to another, although I think everybody shares the blame, in every age group.

Even though wearing a mask, religiously carrying hand sanitizer and socially distancing are effective ways to prevent the spread, there’s really no definite way to avoid getting sick without moving to another planet. For kids and teenagers who don’t have very much control over their lives and independence, right now can be a really frustrating and an even more dangerous time for them. 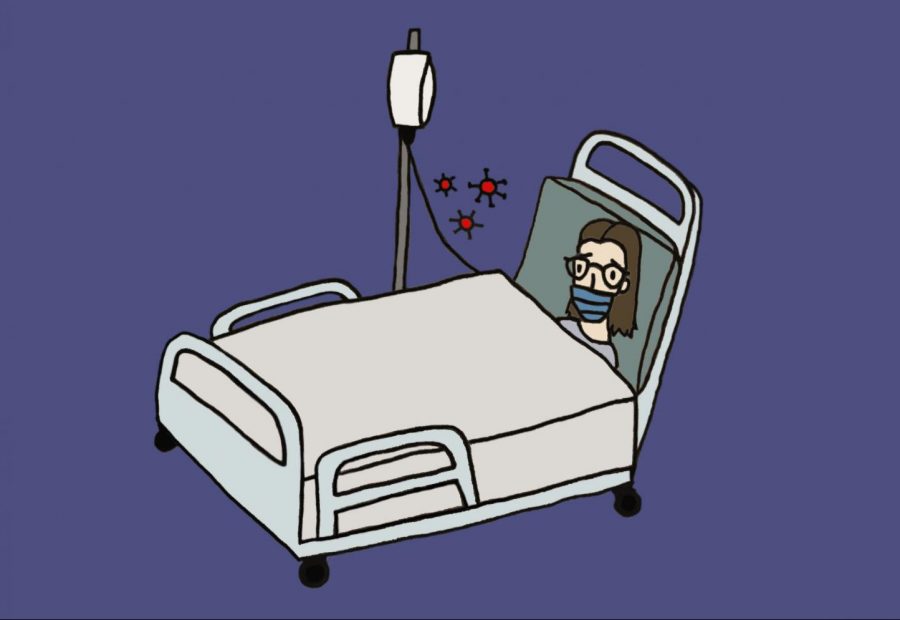 I didn’t suffer the direct symptoms of the virus. Far worse, the virus triggered a life-threatening inflammation of multiple organs in my body.

It was late May 2020, when I noticed that my taste wasn’t right. Soon after, I began throwing up and my fingers turned red. I developed a fever, and I hardly had any energy. On the fourth day of being sick, I told my mom to take me to the hospital. When I got there, I was immediately taken to intensive care. My body wasn’t absorbing nutrients from food, and my gut was in bad shape. I was given intravenous therapy, so I wouldn’t die, and I had blood drawn for testing.

What I had was COVID-related Multisystem Inflammatory Syndrome in Children (MIS-C). I had been infected with the virus that causes COVID-19, which inflamed many of my organs, causing my symptoms. I did not, however, exhibit symptoms of the original virus.

Because I wasn’t absorbing nutrients from food, I was in extremely bad shape. The more important sustenance was given to me through IVs, while others were given to me once I could consume. One potassium solution tasted so bad that I opted to have it through an IV, despite it causing a slight burning sensation. It was common for me to have two IVs at the same time, and eventually I was given a a peripherally inserted central catheter, or PICC line.

A PICC line is essentially a larger IV with a long tube that goes through a major artery to the heart, allowing for medicine to be delivered to the body quicker as well as being able to draw blood better. At one point, I was taking in enough medication to make me feel cold, despite having a fever of 104 degrees.

But even that was a challenge. I spent about a week recovering in the hospital, where I spent most of my time watching Avatar: The Last Airbender on Netflix or sleeping. The day I left, I had to be wheeled out in a wheelchair because I had become almost too weak to walk after spending so much time in the hospital bed. About a week after I left, I returned for a checkup. During that checkup it was discovered that my gut hadn’t been the only organ to be inflamed, my heart was too.

I am doing physically better. I have returned to living as normal a life as can be in the pandemic.”

This discovery was potentially worse than my previously identified symptoms because when a heart swells, especially in the places mine did, it creates an area where the blood slows down and may clump up. This meant that I was at a big risk of a clot blocking blood flow somewhere in my body. If a clot formed and traveled to my heart, I would have a heart attack. If one went to my brain, I would have a stroke. If one made it to a limb, it would have to be amputated.

Immediately, I was put on blood thinning medication as well as steroids to return my heart to its normal size.

At first, my parents were wary of the medication, due to its connection with mood changes, but it was the best option I had. I was allowed to go home that day, but I had to make frequent returns for blood tests, heart ultrasounds, an echo scan, a CT heart scan, a catheter scan and eventually an MRI. It took weeks, but my heart returned to as close to normal as it could get.

As of now, I am doing physically better. I have returned to living as normal a life as can be in the pandemic. My heart will be a bit weaker, but not enough to cause major problems. In the most recent test, the MRI, the results showed that there were no abnormalities. I still take aspirin daily, and I still have small scars on my upper right arm and leg from the PICC line and catheter scan, though the dots from blood tests and IVs have faded.