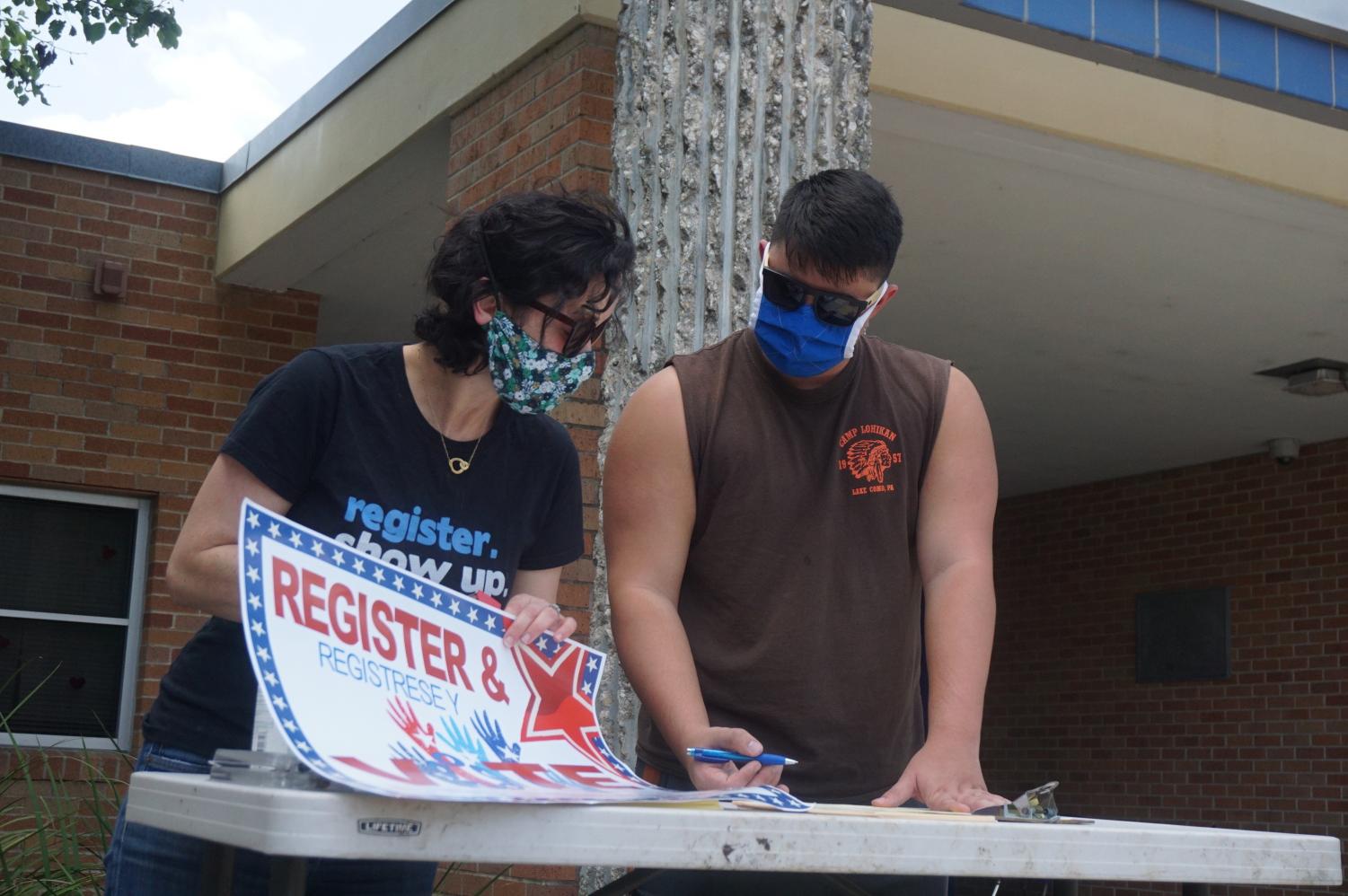 League of Women Voters volunteer Stephanie Land helps senior Jonah Brown register to vote. Brown plans to vote because he feels a sense of urgency about the 2020 election. “I think it is always important to vote because this is a presidential election and no matter what comes out of the election, it is important to exercise your right to vote and not just sit back thinking someone else will do it for you,” Brown said. Photo by David Winter. (Dave Winter)

League of Women Voters volunteer Stephanie Land helps senior Jonah Brown register to vote. Brown plans to vote because he feels a sense of urgency about the 2020 election. “I think it is always important to vote because this is a presidential election and no matter what comes out of the election, it is important to exercise your right to vote and not just sit back thinking someone else will do it for you,” Brown said. Photo by David Winter.

These Knights are major players on Election Day

Mac students show up, show out not only as first-time voters but also as election clerks, campaign volunteers and voter registration drive organizers

As the central focus of our 2020 Election Day coverage, we decided to find and tell the stories of students finding ways to make a difference in the 2020 election, whether they can vote or not. 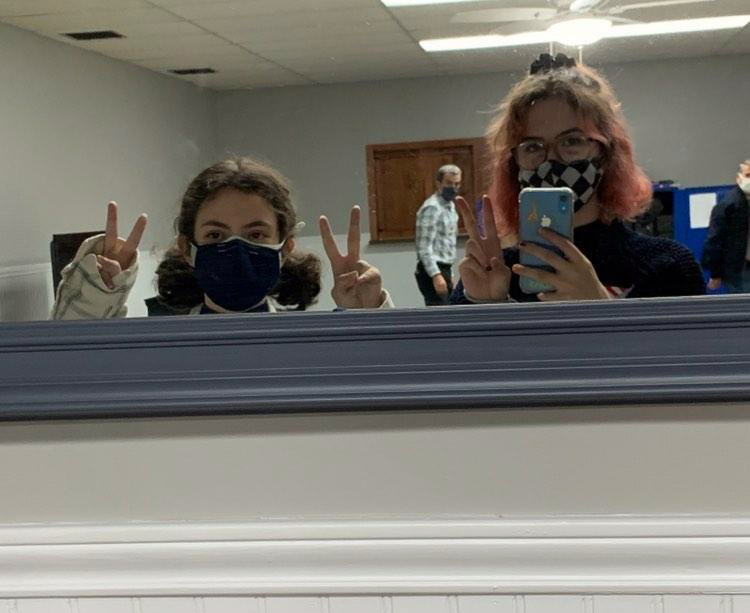 Juniors Zoe Rabinowitz and her friend and Olivia Linscomb, who also worked the polls, pose for a picture after the polls had shut down for the day. By rule, no one is allowed to take photos of election clerks working while a polling station is open.

I want to learn as much as I can before I come to voting age so I can, right when I turn 18, start voting and being able to actually contribute to the movements that are important to me.””

Junior Zoe Rabinowitz is registered to be a student election clerk come Election Day. To apply, Rabinowitz filled out a basic application form and got permission from McCallum principal Nicole Griffith to miss school on Nov. 3 before the district made it a student holiday. Rabinowitz said that she was motivated to get involved when she heard that the usual election clerk staff is 65 and above, a high-risk group for being harmed by COVID-19.

“I had heard that a lot of the seniors had dropped out of being election clerks this year and that there was a big shortage,” Rabinowitz said, “and so I figured, especially amid all of the rumors and talk of the election being really unfair due to voter disenfranchisement, that I should do my part to contribute to making sure that people get to cast their votes.”

Rabinowitz feels an obligation to learn what she can about politics before coming upon voting age herself. “I guess every generation tends to think this way, but I feel like, particularly Gen Z is going to have, and be coming into, a lot of political power,” Rabinowitz said. “And just based on the polls and stuff that I’ve seen so far, Gen Z tends to be kind of more left-leaning, more towards social equality and protections for discriminated groups, so I want to learn as much as I can before I come to voting age so I can, right when I turn 18, start voting and being able to actually contribute to the movements that are important to me.” 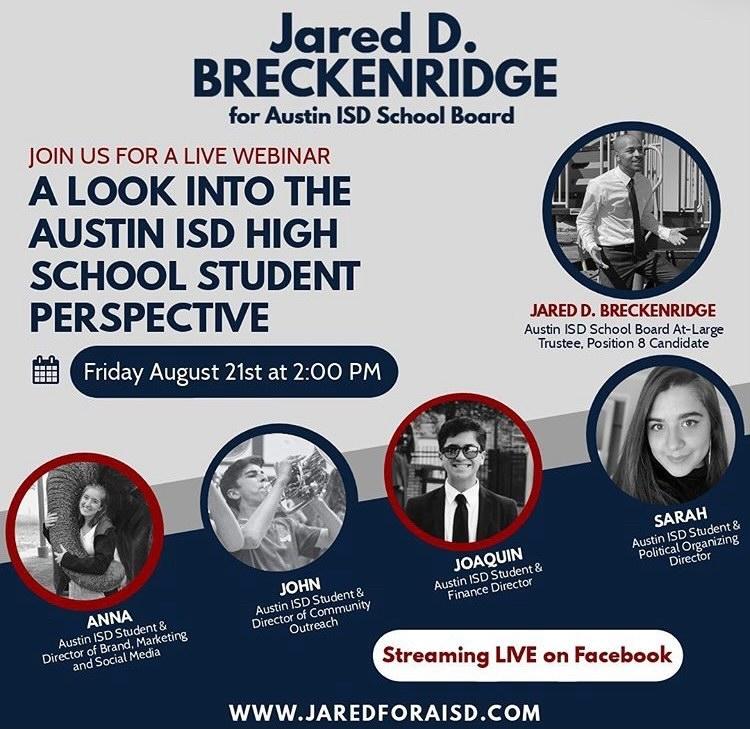 One local candidate that has caught the eye of McCallum students is Jared D. Breckenridge, a 25-year-old college student running for election for the Austin Independent School District School Board at-large Position 8. Breckenridge is currently pursuing a teaching degree at Huston-Tillotson University and emphasizes the importance of student involvement in decisions made by their school district. Breckenridge has enlisted the help of four McCallum students on his campaign team: juniors John Hamlet, Anna McClellan and Sarah Reyes and sophomore Julia Husted. Breckenridge also has campaign volunteers from Anderson High School and Ann Richards School For Young Women Leaders.

“[Breckenridge] has been a consistent attendee at the board meetings for the last several years and he’s been very active in his community,” said Hamlet, the Breckenridge campaign’s director of community outreach. “One of the things he would do is encourage more students to come to board meetings and voice their opinions on what happens because he feels like not a lot of students go, and that’s kind of important as they’re making the rules for how they’re going to take care of us.”

Hamlet emphasized the importance of getting involved in politics at a young age, citing protection of human rights as a personal motivation. “I feel like a lot of people our age are like, ‘Oh what happens happens, we don’t really have a say, so why should we care?’” Hamlet said. “But that is kind of the worst viewpoint to have about this whole situation, especially now when so many rights are being infringed, and the country is so divided. People are always saying that us kids, we’re the future of the country, but no, we’re the present of the country, and it’s time to start acting like it, because the world is not going to wait for us to come and try to fix it.”

Hamlet called his generation to action with the reminder that even though many are not yet eligible to vote, they will be in a few years, and their vote will matter. “We’re the ones who are turning 18, 19, 20 in the next couple of years, and we’re the ones who will be able to vote and make decisions,” Hamlet said. “So it isn’t right that an entire generation, enough to swing an election, is getting pushed aside and told that we’re wrong. We need to spread knowledge and spread awareness and spread enthusiasm for public service so that more people can get involved and help their community.” 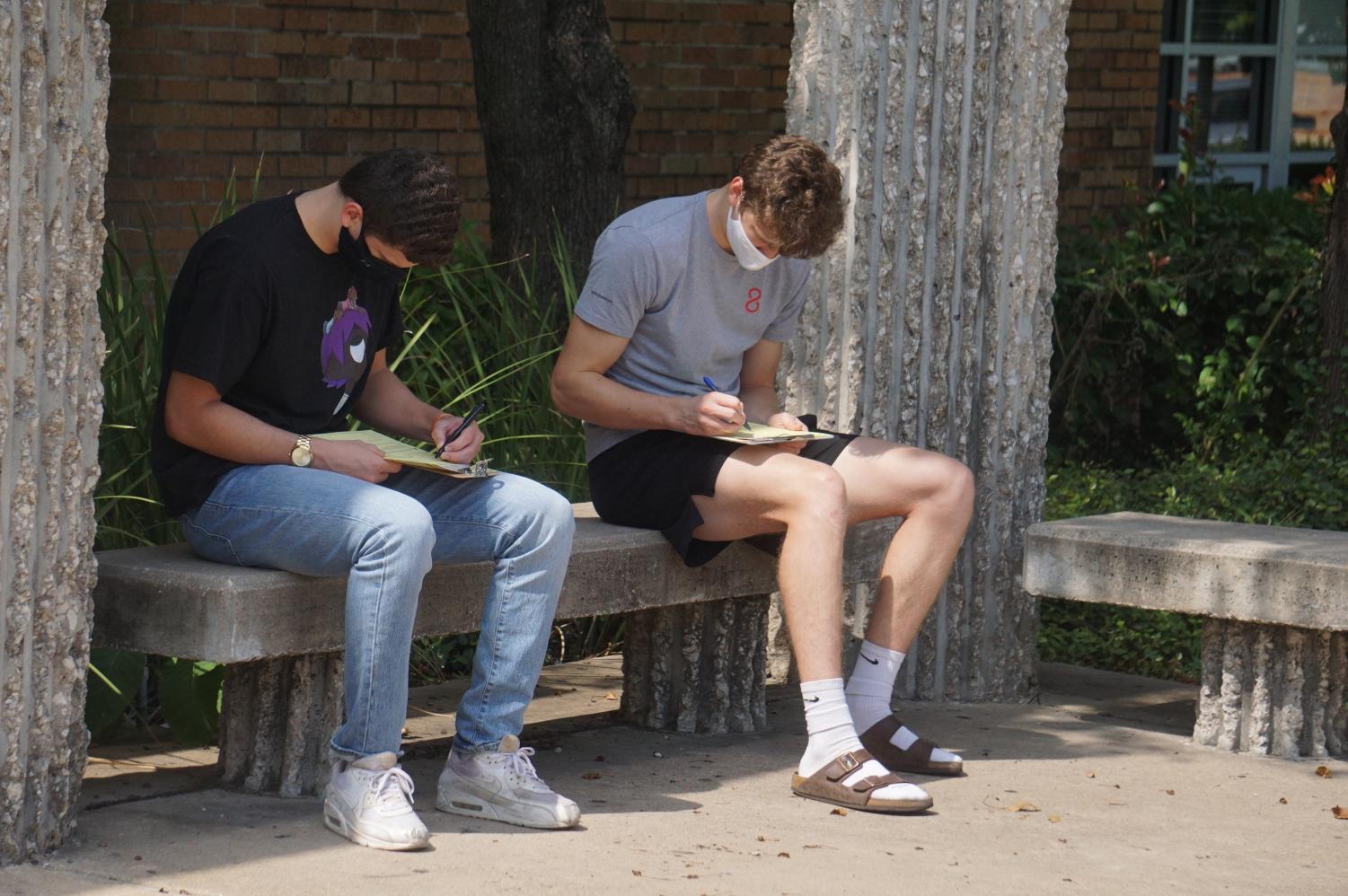 Before they turned 18 on Sept. 26, seniors John and Rob Wade register to vote at the curbside voter registration drive that took place in front of the Mac entrance on Sept. 18. Photo by David Winter.

League of Women Voters volunteer Stephanie Land, librarian Jain Thompson and seniors Denali Jah and Natalie Suri hosted voter registration drives on three straight Fridays beginning on Sept. 18 from 2:30 to 4:30 p.m. Land first had the idea when she heard about the McCallum librarians’ previous efforts to get eligible students registered to vote.

If you are disconnected with the way things currently are in the U.S., it is always your responsibility to speak up and represent your views by voting for people that align with your values. Every vote counts.””

In order to boost those efforts, Land reached out to Thompson with the idea for a drive, and Thompson brought in Jah and Suri from the League of Women Voters Club to help. Land explained that Jah and Suri were key players in the execution of the drive. They made an effort to get the word out by broadcasting messages about it that they wrote themselves during advisory periods. In total, they were able to help 17 voters get registered. Suri emphasized that every vote counts. She also called her fellow students to action.

“To my non-voting peers, I would say not voting is giving in to the current state of our country because one vote can make a difference,” Suri said. “Voting is the only concrete way we have to tell the government what we want it to do.”

Suri’s fellow student organizer, Denali Jah, also emphasized that everyone who can vote should vote. “Voting is important because it makes sure that everyone’s voice is heard,” Jah said. “If you are disconnected with the way things currently are in the U.S., it is always your responsibility to speak up and represent your views by voting for people that align with your values. Every vote counts.”

Land appreciated the dedication that Thompson, Jah and Suri applied to organizing the drive, especially during a time when many students and teachers feel overwhelmed.

“I know how overloaded and stressed the teachers are right now, and how rough this pandemic has been on the kids, so I was both grateful and impressed at everyone’s enthusiasm and follow-through,” Land said. “Natalie and Denali are the kind of kids that give me hope for the future.” 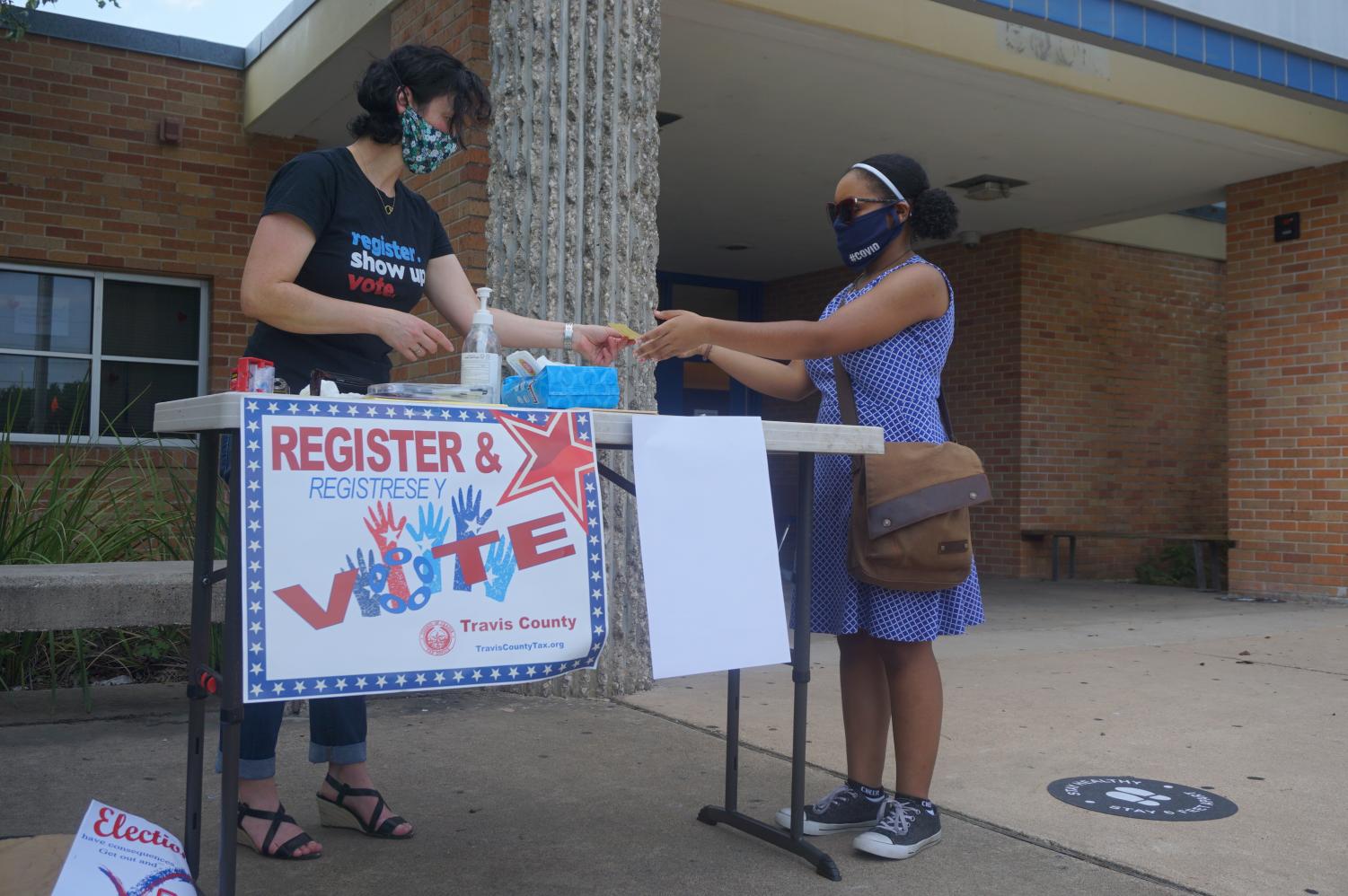 With the help of League of Women Voters Club volunteer Stephanie Land, senior Vanessa Lee registers to vote during the curbside voter registration drive in front of the main entrance of the school on Sept. 18. The club registered 10 voters (nine students) during the drive that day.

Many McCallum students who turned voting age this year are motivated to get out and vote. Numerous attendees of the voter registration drive organized by Land, Thompson, Suri and Jah explained that they feel an obligation to make their voices heard.

Senior Jesse Rodriguez registered to vote because he wants to make a difference.

“I really wanted to have the opportunity to have a say in what goes in our country,” Rodriguez said. “It also feels empowering knowing that I could make a difference and possibly choose who the new president will be. … I just hope people know how important it is to vote if they want change.”

Senior Jonah Brown, who was first in line at the Sept. 18 voter registration drive, echoed the sentiment that those who have the ability should vote.

“I believe that it is important to vote as soon as you are eligible to send a message to the candidates that they have to take into perspective the needs of young adults,” Brown said. “Candidates might be tempted to ignore young people, but if we all vote, they will realize they need to listen.”

Senior Vanessa Lee also felt an obligation to register, citing her identity as a woman of color and the current political landscape as supporting reasons.

“It’s an obligation, especially being a woman of color,” Lee said. “My family generations ago weren’t even allowed to vote. It’s a privilege that I can’t take for granted. Along with that, I’ve seen how the president that we have hasn’t done anything to better African Americans or women. He’s dismantled affordable health care, defunded Planned Parenthood and has given praise to those that have murdered innocent African Americans.”

Lee also opened up about some personal reasons for her motivations in this coming election that will affect her vote.

My family generations ago weren’t even allowed to vote. It’s a privilege that I can’t take for granted.”

Rodriguez spoke for his generation with the statement that he has political motivations as well as the desire to have the political power that comes with turning voting age.

“I believe that the huge increase of people in support of the Black Lives Matter movement has really motivated us to make a difference in our world,” Rodriguez said. “After we’ve protested and signed countless petitions, we are finally beginning to see how much power we actually have. Now that most of us are turning 18, we’ll finally have our chance to voice our opinions.”

Senior voter Luci Borowski said that although she agrees that there is a certain sense of upheaval right now, she would still vote no matter what. “It was just super exciting to finally get my voice heard,” Borowski said. “I feel like this generation has so much to say but doesn’t always have the legal power to do so. … Nothing necessarily motivated me. It’s just something that seemed like a natural thing you do when you turn 18. Even if the world was perfect and our government didn’t look how it looks right now, I would still vote.”

–with reporting by Zazie Bryant, Bella Russo and David Winter

4 Responses to “These Knights are major players on Election Day”