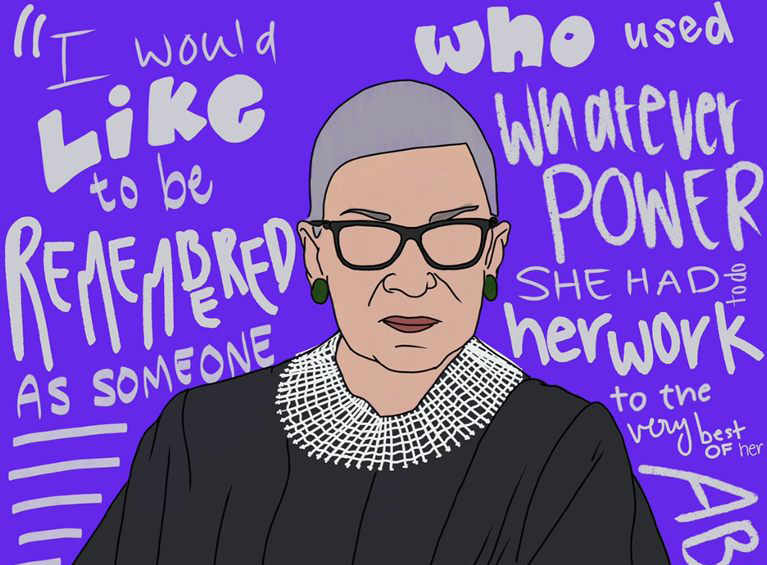 How RBG inspired the generation of women who will follow her

Supreme Court Justice Ruth Bader Ginsburg lost an 11-year battle with cancer on Sept. 18, after a lifetime of fighting for causes including the gender wage gap, racial inequality, pushback on the legalization of abortion, equal protection and LGBTQ rights. She was a trailblazer, and her legacy has inspired many of us in the McCallum community.

Shield columnists Alysa Spiro and Samantha Powers share how and why RBG made a difference in their lives and what they plan to do to continue the work that she started. 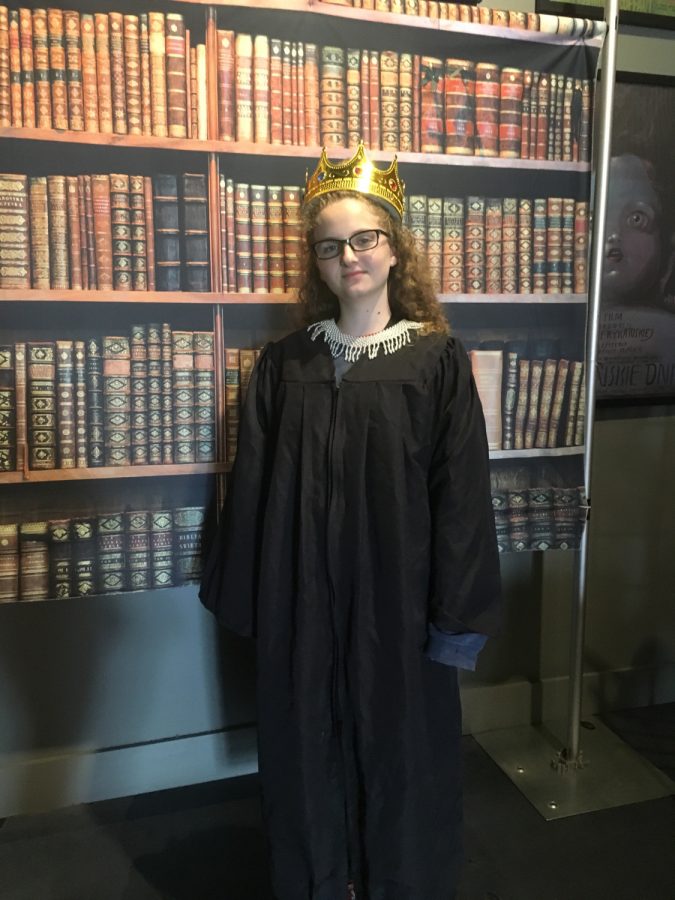 FEELING NOTORIOUS: Dressed in a full-length robe, collar, glasses and of course, crown, Alysa has her picture taken at Austin Film Society’s screening of The Notorious RBG. Little did she know, this film would mark the beginning of a life-long love for Ruth, both as a justice and as a person. Picture provided by Alysa Spiro.

Even in death, RBG continues to be a guiding light to fellow Jews who are inspired by her example and her legacy

It feels damn good sharing a religion with the notorious RBG.

Maybe that’s a weird concept for some people to grasp, how I can feel such an intense connection and pride towards someone I don’t even know in real life. But it’s there. That little smirk that comes up when RBG is mentioned, right before I say “she was Jewish, you know.”

And I’m not alone. Jonathen Freedland, a reporter for The Jewish Chronicle, wrote about it eloquently in his article We should be very proud of the Jewish RBG.

“The more I read about RBG, the more I felt it: pride that a woman of such legal brilliance, of such devotion to the principle of equality before the law, of such defiant courage in confronting sexism, and of such indefatigable professionalism, was a fellow Jew,” Freedland wrote. “It was as if the glow around Ginsburg was one that all Jews could bask in.”

But throughout it all, there was Ruth. The fighter, the dissenter, the Jew.”

Because here’s the truth: growing up Jewish is hard. It’s hard when you’ve spent your whole life in Texas where people don’t know what Yom Kippur is. It’s hard when the politicians you looked up to don’t apologize for their insensitivity towards Jews or for perpetrating anti-Semitic tropes. My experience with Judaism can be defined with one word: isolating.

But throughout it all, there was Ruth. The fighter, the dissenter, the Jew. It’s like there was this common thread connecting us, so that whenever I looked into her eyes, I saw a tiny glimmer of myself. Of the person I could one day grow up to be. Isolation was replaced with empowerment.

Losing her on Rosh Hashanah was hard. The woman who helped me navigate my Judaism throughout the years gone, just like that.

The Mourner’s Kaddish, the Jewish prayer read to honor the dead, is something I’ve always felt uneasy around. The subject of death has always bothered me. As services approached their end, and everyone turned their prayer books to the Kaddish, the formerly joyous room would become somber. And quiet mourning was always too much for me. I didn’t want to reflect, to cry, to think. I wanted to be happy and ignore the gentle sadness that permeates life.

But the night of Ruth’s death felt different. So for the first time, I looked at the Kaddish, read it, and allowed the sadness to seep into my life. I allowed myself to mourn.

A Jewish teaching says those who die just before the Jewish new year are the ones God has held back until the last moment bc they were needed most & were the most righteous. And so it was that #RBG died as the sun was setting last night marking the beginning of RoshHashanah

Because here’s what I found out: mourning is the act of celebrating one’s life. And with Ruth, there is so much good to celebrate. The timing of her death was so painfully spiritual.

“Those who die just before the Jewish new year are the ones God has held back until the last moment because they were needed most and were the most righteous,” said Nina Totenberg, an old friend of Ruth, on the night of her death. “And so it was that RBG died as the sun was setting last night marking the beginning of Rosh Hashanah.”

Even in her death, Ruth continues to be a guiding light to me.

So allow me to offer one final thank you. Thank you for your guidance, for your distant and gentle love, for your embodiment of goodness and holiness.

May your life be a blessing. I hope the challah is good in heaven.

This is the first in a series of personal columns celebrating the legacy and the influence of Supreme Court Justice Ruth Bader Ginsberg who died last Friday at the age of 87. 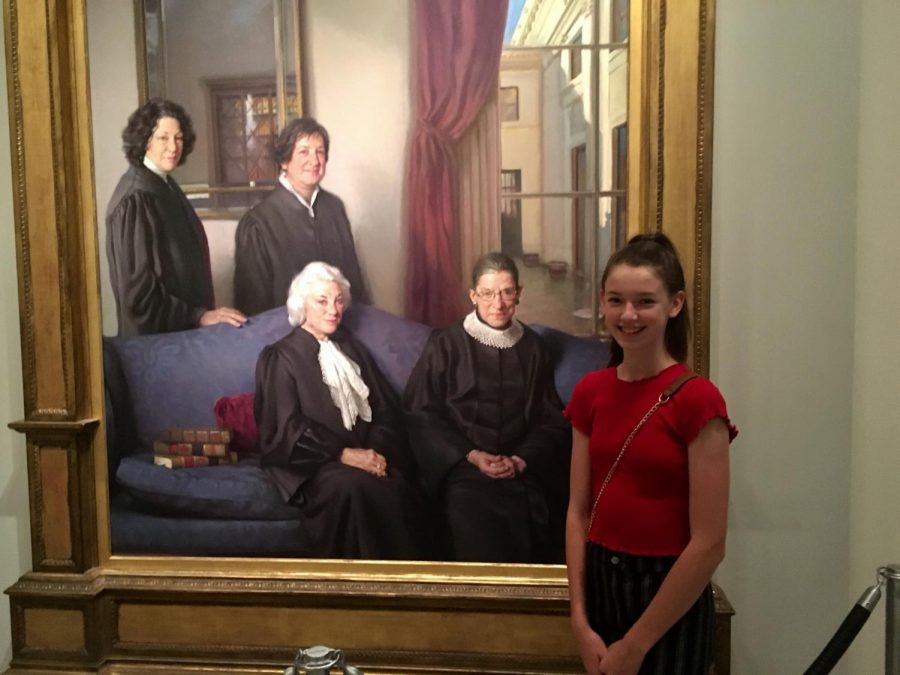 Samantha poses with a portrait of all the female Supreme Court justices at the National Portrait Gallery during her family’s visit to Washington DC in the summer of 2018. Samantha hopes to one day join that hall of fame as a woman serving on the highest court in the land alongside her idol, Justice Ginsburg. Photo courtesy of Samantha Powers.

An inspiration to future trailblazers

On Christmas morning four years ago, my parents gave me a book entitled Notorious RBG. On the inside cover, they had written a note: “Inspiration for the next trailblazer.” When I began to read about this small but mighty dissenter who stood up for women’s rights, I had no idea how much my life was about to change. As soon as I turned the last page of that book I knew immediately what I wanted to be when I grew up: exactly like her.

Ruth Bader Ginsburg means a lot of things to a lot of people, but to me, she is a role model.”

I am aware of the irony that my introduction to this Jewish icon happened to be on Christmas, but I like to think that RBG appreciates unity between different groups of people. As people with vastly different spiritual backgrounds mourn her loss, I have no doubt that she is receiving prayers of all kinds from the diverse array of people whose lives she impacted.

Ruth Bader Ginsburg means a lot of things to a lot of people, but to me, she is a role model. From a smart-as-a-whip high school journalist in Brooklyn to a Harvard and then Columbia law student at the top of her class to a judge at the highest court in the land who commanded respect, she never stopped to rest. I was shattered by the news of her passing, but I am comforted that she can now rest after 87 years of working tirelessly to break barriers for millions of people in our country. Ruth touched all of our lives in her ongoing crusade for human rights. She was exactly what the world needed at exactly the right time. Her loss was a cosmic shift; it feels bigger than any one of us.

That’s what Ruth stood for in her years as a women’s rights activist, lawyer and eventually Supreme Court justice: dedication to bettering our country for those who are a part of it. It was about more than just the cases she argued or the dissents she delivered, it was about the precedents they set for generations to come. Ruth Bader Ginsburg forever changed the course of history.

Ruth showed generations of women and girls that if something isn’t right, we should get out there and fix it.”

Ruth is an incredible role model for girls and women across the country, including myself. Who knew that a quiet girl from Brooklyn would grow up to be a social justice pioneer? Ruth’s humble beginnings as the daughter of a Jewish immigrant and a Polish New Yorker never stopped her from following her dreams. Even after her mother passed away on the day she graduated high school, Ruth persisted. It is this same persistence that she applied to her crusade for human rights, always pushing against the status quo.

Ruth showed generations of women and girls that if something isn’t right, we should get out there and fix it. Because of her strong example, I want to go out into the world and make it better. I fiercely believe that there is nothing more patriotic than the desire to better one’s country, and I feel that it is my duty and my honor to spend my life in pursuit of a greater nation for all of us.

This is the second in a series of personal columns celebrating the legacy and the influence of Supreme Court Justice Ruth Bader Ginsberg who died last Friday at the age of 87.