One more run at state 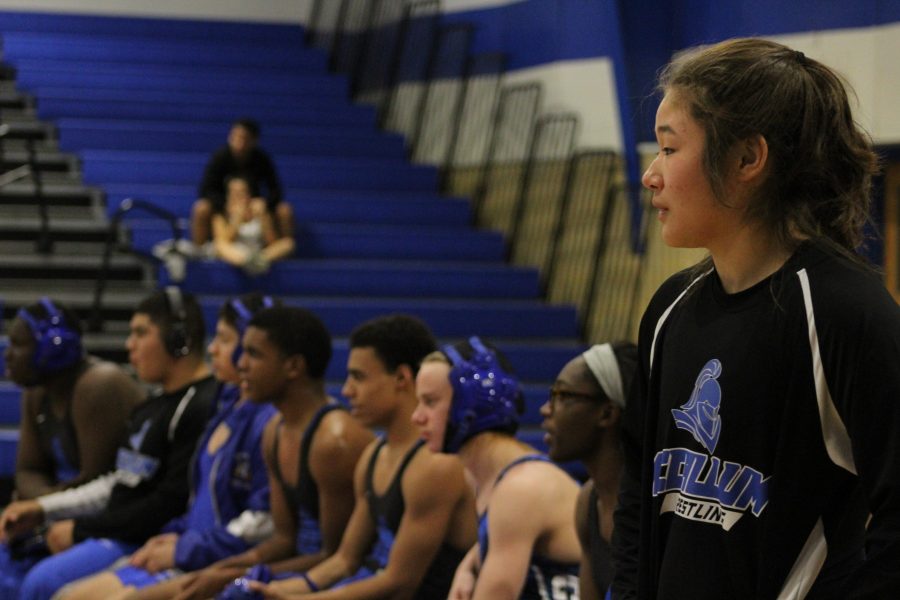 [wzslider]
The only wrestler to qualify for three state tournaments takes aim at state bid No. 4
Before her passion for wrestling was discovered, Maya Shimizu was interested in the arts. It wasn’t until someone threatened to fight her in seventh grade at Kealing Middle School that she became interested in wrestling.

“This girl threatened to fight me, and I told her that she better watch herself because I’m on the wrestling team,” Maya said. “But at my middle school there was no wrestling team, so I was lying then, but it made me think that I should join a wrestling team.”

And during her freshman year at McCallum that is exactly what she did. Now four years later she is poised to make a run at qualifying for her fourth state wrestling tournament, something Coach Ray Amaro said no McCallum wrestler has done before.

Looking back at her first couple of times wrestling, she thinks she’s a lot better now than when she started.

“Now I’m actually more aware about what I do on the mat and am able to get in more moves. I’m a lot better now than when I started,” Maya said.

Her teammate Adriana Boortz joined the wrestling team at the same time that Maya did. Both came into wrestling without having any experience.

“We’ve been on the team for four years together, and have gone through everything together,” Adriana said. “When we were freshman, we didn’t know anything, so we just grew up together on the team.”

Four years later the two seniors are the reigning district champions in their respective weight classes, and both hope to return to both the region and state wrestling tournaments for one last crack at a state title.

Adriana gives her teammate of four years a fighting chance.

Her beginnings were certainly humble. As a freshman who had never wrestled before, Maya struggled to pick up the moves when her teammates were getting it.

“People were trying to teach me the moves, and I just didn’t get it, it wouldn’t click,” Maya said. “It was especially hard because I was watching all my other teammates getting it, but I was still struggling.”

But it wasn’t long after that Maya started to pick up on the moves and her technique. Her coaches were impressed when she won district her freshman year, but they had no expectations that she would advance past the region meet because freshman don’t usually go to state.

But then Maya shocked everyone, including her coaches, by qualifying for state on her first try as a freshman. She’s has enjoyed a lot of success since. One of Maya’s favorite moments as a McCallum wrestler came a year ago when she went to state as a junior for the third year in a row.

After placing in the top five at regionals, Maya qualified for state. Improving herself has also been a highlight.

“Going to state and improving myself has been a highlight, because freshman year I used to do a lot of the same moves over and over again, that were really basic moves.” Maya said. “And this year I’ve been working a lot more on my technique and incorporating them into my matches.”

Adriana has watched her teammate improve over time and understands why Maya is so tough to beat.

“Her aggressiveness, her stance, the way she moves, all make Maya a good wrestler,” Adriana said. “We make fun of her on the team because the way she moves looks like she’s dancing and it looks funny, but it throws off her opponents, so it works.”

Maya has compiled an incredible won-lost record thus far in her career, but her past success also increases the pressure for her to be the best.

“My toughest moments for sure have been losing this year,” Maya said. “Your fourth year, everyone thinks you’re going to be the best, and are going to be undefeated. So taking loses has been real hard.”

Through the high and low moments of her wrestling career, Maya has not taken any moments for granted, and has learned many things from her experiences. She’s learned self-control, and discipline.

“You have to discipline yourself a lot as a wrestler,” Maya said. “You have to watch your weight, your food, and you have to be constantly working out in order to maintain your weight. It’s just like a lot of self-control.”

Coach Amaro agrees that discipline has been a major component of her success.

“I think she’s learned a lot of discipline,” Coach Amaro said. “She’s learned how to wrestle, and what to do. She’s loyal to the school and to wrestling, and that’s the type of athlete we want here at McCallum.”

Adriana added that Maya has helped her to become a better wrestler and vice versa.

“She’ll be my drill partner every now and then and whenever I’m upset about a match she’s always there to comfort me,” Adriana said. “Physically, she’ll help me with strength and I’ll help her with speed. Because the smaller you are as a wrestler, the faster on your feet you can be.”

“What I like about wrestling is it’s a very individual sport, so there’s not any sort of competition between us,” Maya said. “We’re all hoping for each other to win, and we all support each other.”