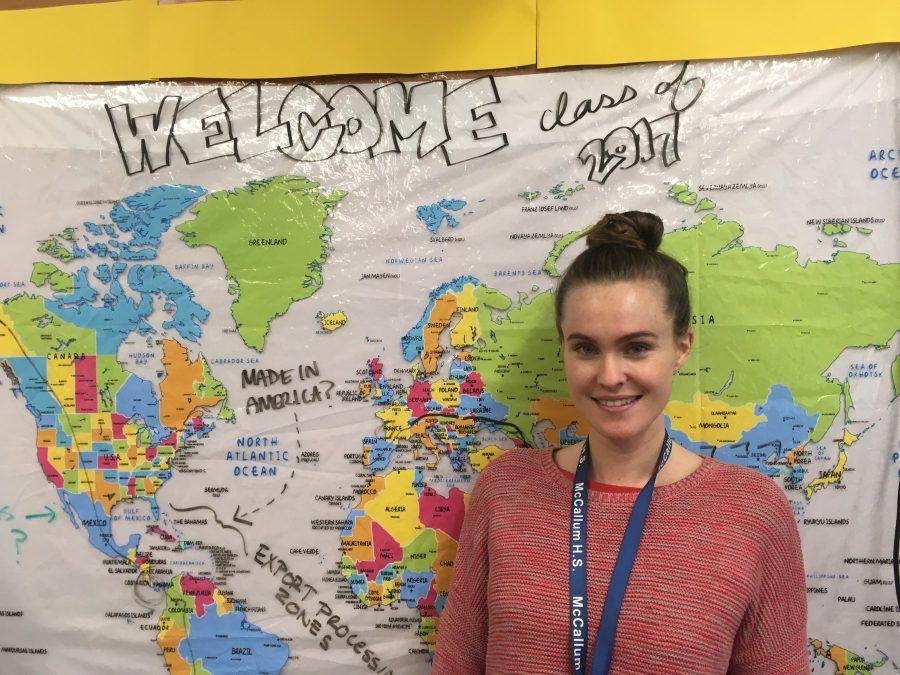 New teacher believes that economics about more than just money
In Lucy Griswold’s economics classes, it’s not uncommon for students to learn classical economic theory, discuss gender politics and dance all in the same class period. 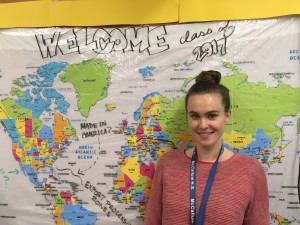 Ms. Griswold, a first-year teacher at McCallum, may have some unusual teaching lesson plans but it’s all to keep the students engaged. She’s the teacher who’s trying to make economics, a course that’s notorious for being a snooze, exciting. After all, she does believe that learning is one of the highest expressions of humanity and her favorite thing about teaching is getting students excited about learning.

Ms. Griswold wasn’t originally expecting to teach economics when she came to McCallum as her specialty lies in history and sociology. Although she says that teaching unfamiliar material is sometimes stressful and time-consuming, she still feels passionate about her subject matter. It was while she was attending The University of Texas at Austin when she first became involved in economic issues. She participated in an on campus group that was inspired by Occupy Wall Street, the protest movement against social and economic inequality, that protest the privatization of education at UT, particularly concerning the selections for its Board of Regents.

Ms. Griswold has always been interested in issues of social and economic inequality. Growing up, she split her time between Miami and Indianapolis. In Miami, she attended a school in which the majority of the student body were people of color. In Indiana, she attended a school that was very homogenized and upper-middle class.

“I was living educational inequality, noticing that at my school in Indiana there was more privilege, that the education I was getting in each space was different,” she says. “Because of that I think that, from a young age, I was able to see injustice.”

Ms. Griswold went on to get her graduate degree in urban education, a major that not only focuses on curriculum and instruction but also what it means to teach at schools with a high concentration of socioeconomically disadvantaged students. She is also the sponsor of McCallum’s new student organization, McCallum Justice Coalition, a club dedicated to social justice, and also tries to incorporate the discussion of social issues into her classes as much as her strict curriculum will allow. In fact, one of the goals she has for herself is to introduce AISD’s newly approved “Special Topics in Social Studies” program. The program allows teachers to design their own full-length courses within the social sciences to teach such as Mexican-American history or women’s studies.

“Too often we don’t make room for these conversations in social studies classes and in AP Macroeconomics, where there are very specific standards, there’s not a lot of room to have these conversations,” she explains. “I would love to teach a course where that is the conversation.”

Social justice isn’t, however, Ms. Griswold’s only interest. She also fancies herself to be a bit of a comedian, saying that her dream job would be to be a sort of female Jon Stewart and host her own “comedy as commentary” show. Ms. Griswold comes from a family of comedians; her father and three out of her seven siblings are all involved in the industry, so humor comes naturally to her. While she was at UT, she wrote a satirical column and drew political cartoons for The Daily Texan. In the classroom, she tries to make students feel at ease by cracking jokes in between lessons. To Ms. Griswold, to be a host of a satirical news show would be the perfect intersection of her love of teaching and her love of comedy.

“I think that so often people, especially young people, are alienated from politics and social and economic questions,” she says. “So what better way to make people care about things than to make it funny?”

Ms. Griswold is aware that many seniors aren’t exactly ecstatic to take economics because they consider it to be boring or intimidating or just plain pointless. Because of this she makes sure to remind them that learning the language of economics opens up a lot of opportunities for them to ascend to positions of power.

“We often think of economics as uninteresting or even alienating,” she says. “But ultimately learning it and being able to critique it offers you a legitimacy and credibility that is invaluable if you want to change the world.”