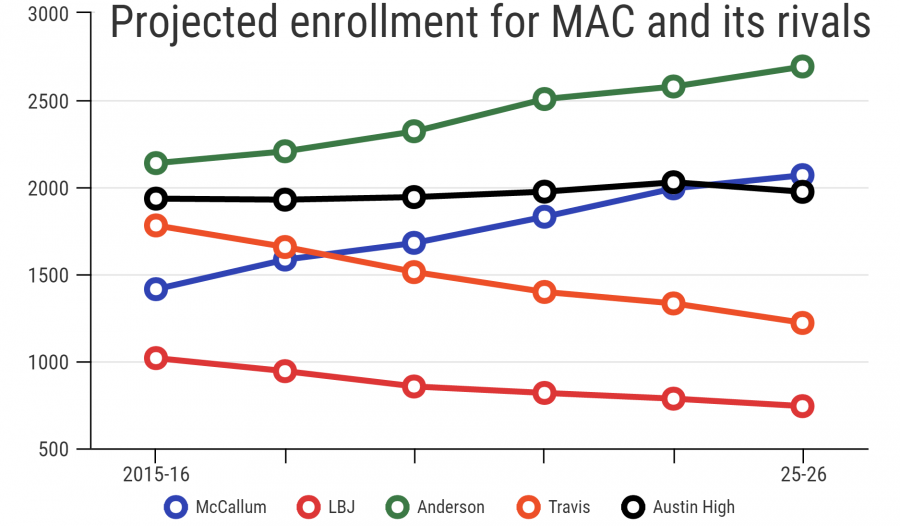 Many McCallum students have lived in Austin long enough to have seen Austin rapidly grow from a fairly small capital of around 700,000 people to a hipster mecca of more than 2 million residents. This boom affects much than just the traffic on MoPac; it’s changing education in Austin.

One could reasonably assume that the influx of new residents would translate to a growing student population. For AISD, however, that simply isn’t the case.

Last year, AISD released a demographic study that showed that Austin could lose 7 percent of its student population in the next 10 years.
THE RISING COSTS OF SHRINKING ENROLLMENT
This number may not seem too large, but it does have a large influence on the AISD’s funding.

“Overall, when our district declines, the way it impacts us the most is the funding we get from the state,” trustee Julie Cowan said. “The state pays us for the people in seats every day; we still have some overhead costs that won’t change, and yet we don’t get dollars if the kids aren’t in the seat. This year it’s projected we will give over 4 million dollars back under property taxes, because the values of your home and my home have gone up so much.”

One major cause of the decline is that many Austin residents, when faced with rising prices, have been forced to move. As housing prices go up, wealthier individuals tend to migrate to Austin, which further drives prices up, creating a cycle that negatively affects less wealthy residents. One group particularly affected is teachers and students, many of whom don’t make enough money to reside close to their schools and families.

“I know many colleagues (teachers) who are renting because they cannot afford to buy a house within a reasonable commute of school,” McCallum parent Susanna Cohen said. “But their rent is more than my mortgage, which is ridiculous. I look around at neighborhoods where people have torn down houses and are building enormous homes, and I don’t understand where the money comes from. There are some very wealthy people in Austin, but there are many more people who struggle every day. The public transit system in Austin is lacking. The traffic is horrendous. People can’t afford to live near where they work. As a native Austinite, I get more than annoyed by all the growth.”

“Although there will continue to be pockets and neighborhoods with high concentrations of affluent families in Austin, it has been middle-class families that are becoming increasingly less common within the urban core,” Robinson said. “Without a sizable share of middle-class families to stabilize the urban core, working-class families suffer because the rung above them on the socioeconomic ladder has been removed, making it more difficult for them to achieve upward social mobility.”
WHY FEWER FAMILIES CHOOSE AISD
There are two reasons for the decrease in families with children in Austin: first of all, the national birth rate how lowered greatly since the recession of 2008, dropping by more than 3 million births per year in the span of five years. Additionally, because of the increasing issues with affordability in Austin, many families have been forced out to areas such as Manor and Buda, leaving room for even more wealthy individuals to move in their place.

“What concerns me is that this just widens the chasm between the ‘haves’ and the ‘have nots’ here in Austin and in the surrounding area,” McCallum parent Della Molloy-Daugherty said.

The rising prominence of charter schools, publicly-funded but independently run schools, in Austin is also a large factor in the missing-student problem.

“It’s been a wake up call for AISD,” Cowan said. “My friends who are trustees in other central Austin school districts are realizing that they’re coming along and taking part of the share. You can look at charters in two ways. They’re a threat, taking our students; but they’re also a challenge making us step up our game. It’s not great that we have to use our budget dollars, instead of on educating kids, on marketing ourselves. But if that’s the environment that the state legislature has put us in, then that’s what we’ll have to do. It challenges us; we have not provided the same outcome of education for kids all throughout our district, and charter schools have come in where outcome isn’t as good as we like, and they’re making us look at the schools there and make sure that we’re doing the best things for our students.”

Many parents have or are considering making the switch to one of the 17 local charter schools, or at least see them as a viable competitor to traditional public schools.

“Charter schools were created in response to the (substantiated) claim that public schools are not doing a good job at education,” McCallum parent Mike Laymon said. “They obviously take away from enrolment of public schools, but I don’t believe it is a significant number at this time. Charter schools do not have the same financing structure as public schools, so they have to educate the students with less money, [but] they still seem to be doing a better job. The public schools need to rise to the challenge to match the quality of education provided by the charters.”
WHAT AISD IS DOING ABOUT IT
One strategy AISD is employing is a PR campaign with the intent of recruiting (or re-recruiting) students from charter or private schools. $350,000 of last year’s budget was spent on hiring an independent firm to promote AISD, a move which was criticized by some.

“I think that our schools are great schools,” Cowan said. “We just haven’t let the community know the great programs we have inside them. It’s making us think about that a little better.”

Other solutions that have been explored include partnering with realtors to promote affordable housing, allowing students from other districts to transfer to AISD schools, and resizing certain portions of the district; potentially closing underenrolled schools.

“We need to rightsize our district,” Cowan said. “If we’re going to have 83,000 kids instead of 86,000 kids, we need to have the facilities and the best teachers for those 83,000. Some of my trustee friends really want to work on bringing people back and making it more affordable, but I think our No. 1 goal needs to be on educating kids, so that when they’re adults they’re self sufficient and can provide for themselves and their families.”
AND THEN THERE’S MAC
Despite AISD’s steadily declining numbers, some schools, like McCallum, are experiencing a population boom, and in some cases even overcrowding. McCallum is expected to grow 46 percent in the next 10 years; the most out of all high schools in the district. McCallum’s population is expected to increase from 1,414 students to 2,069 by 2025.

“I think it’s increasing because McCallum is a good school because of the subjects we have,” attendance specialist Jewell Jackson said. “The Fine Arts Academy, all of those fine arts classes, when they go to competitions they usually win. Even our newspaper gets first place. I think overall McCallum is just a good school, and people are becoming aware of that fact.”

“First, more students are staying within the vertical team of schools,” Baxa said. “Lamar has done a good job of bringing neighborhood students back to Lamar, which has increased the size of our freshman class each of the past three years. Second, the Mueller housing development brings in more families to our attendance zone.”

In contrast to McCallum, LBJ is expected to drop 27 percent, while Travis is supposed to drop by 37 percent. McCallum is one of the few exceptions to the declining trend; most high schools are expected to face decreasing enrollment in the upcoming years.

While McCallum’s growth is a sign of success, not everyone is sure the trend is for the best.

“I don’t want [McCallum] to get too big,” Cohen said. “It’s always been considered a school where everyone has a place—a diverse and welcoming student body. I hope it stays that way.”