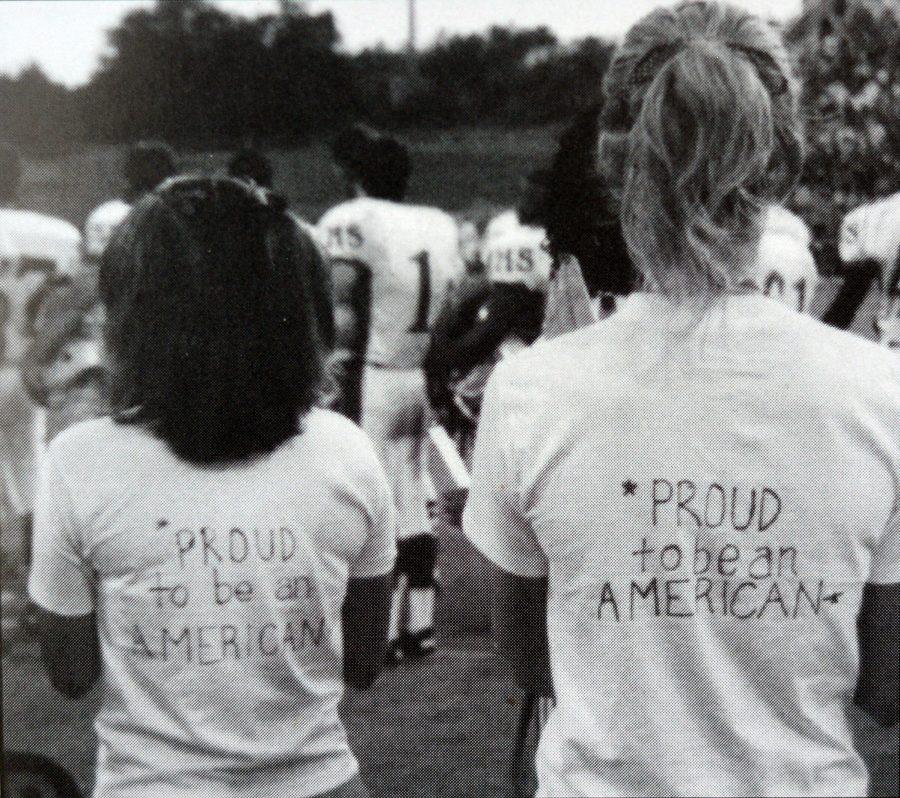 Senior Fera Rocha and sophomore Bay Berry hold candles at the game against Lake Travis, Sept. 14. "I was really glad that everyone wore red, white and blue," Berry said. Photo by Erin Brown.

Editor’s Note: To observe the 15th anniversary of the 9/11 tragedy, we are posting the Shield story that was published in our print edition on Sept. 14, 2001.  The photographs in this post are from the 2001-2002 Knight and depict the football game played against Lake Travis on Sept. 14. The schools played the game as scheduled, but those in attendance lit candles to honor the victims of the attack. The cheerleaders sold the candles as a fund-raiser to support Red Cross efforts at Ground Zero.

Every generation has one.

A day which is seared forever into the memories of all involved.

For students’ grandparents, that day is Pearl Harbor. For students’ parents, it is the assassination of John F. Kennedy. Now, everyone will remember a series of actions, which have been heralded as the worst act of terrorism committed on U.S. soil.

Students awakening and arriving at school Sept. 11 saw the cavernous holes in the side of the Twin Towers of the World Trade Center in New York City playing on TV’s in classrooms. Quickly, the news got around. Two planes had been hijacked and flown into the Twin Towers. Within an hour and a half, both Twin Towers, icons of america’s strength, wealth and prosperity, had crumbled to the ground, covering a two-block radius in debris.

Then, another tragic event occurred. A third hijacked plane, this one from Newark, crash landed into the Pentagon, penetrating the southwest wall and cutting almost completely through to the inner courtyard. A fourth plane, hijacked from Washington D.C. and crash-landed in Somerset, Pa., was presumed to be headed towards Camp David, the White House or the Capitol Building. The significance of this series of events is still settling in. Since the events unfolded at the beginning of the school day, most first-period classes consisted of watching the news, discussion of the incidents and anxiety.

“It was like I was watching a movie,” Ferguson said. “I couldn’t believe it was actually happening.”

The severity of everything did not immediately set in.

“It’s surreal, and it’s unbelievable that anyone could do all this,” junior LE Dorsey said.

In his address to the nation that evening, President George W. Bush said, “These acts shatter steel, but they cannot dent the steel of American resolve.”

“They can do whatever they want, but they’ll never take America away,” Bailey said.

One of the scariest repercussions of the terrorism is the fear of the U.S. becoming involved in a war, according to junior Winter Calloway.

Bookkeeper Joan Calman moved to Texas from New York eight years ago and still considers herself a New Yorker.

“I feel like I was punched in the stomach. I used to work in lower Manhattan, just blocks from the World Trade Center,” Calman said. “Everyone I know is OK, but not everyone they know is OK. It scares me.”

For more 9/11 stories from the MacJournalism archive, please click the links below: