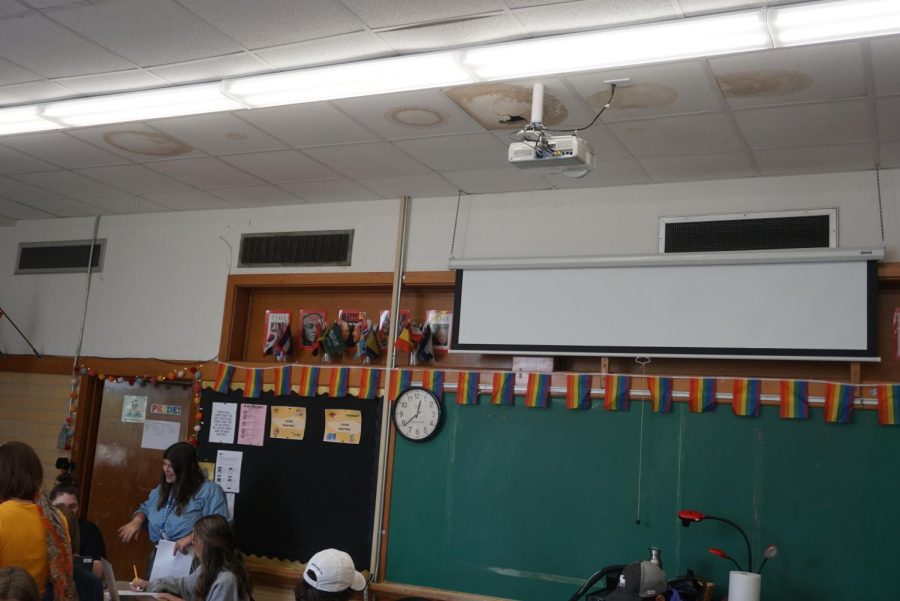 On Monday Aug. 22, teachers across McCallum experienced leaks and flooding due to Austin’s heaviest rain in three years. Constructed in 1953, the school is aged and has been prone to rain leakage for a while. But the effect of Monday’s rain was profound: the water impeded teacher instruction, student learning and safety.

In one of the band storage rooms, ceiling tiles caved in on several steel drums, and leaks in the fine arts hallway damaged woodwind instruments. Other water-damaged instruments are now taking up classroom space while they dry out.

“This isn’t the first AISD facility I’ve been in that has flooded [or] leaked due to rain,” assistant band director Ryan Pride said. “Figure it out y’all.”

Carroll was forced to move all desktops to the center table to protect them from future water damage, and for the time being, no graphic design students will be using them or the Adobe software necessary for the course. The software does not run on student Chromebooks.

The leaks occurred around wires, presenting a serious danger to student safety.

“This is extremely dangerous.” Carroll said. “Water puddled on plugged-in equipment and power cords. Have you ever seen the warning tag on a blow dryer?”

Safety was also a concern of science teacher Sarah Noack, who thinks the possibility of mold is a major issue.

“One of the things that concerns me is the microorganisms that are growing in our walls and ceiling as a result of so many leaks,” she said. “There’s no way it’s healthy and safe to grow in this mold-filled air.”

Noack has experienced leaks for the seven years she’s taught in room 141 and has consistently had to clean up puddles and replace damaged lab supplies, papers, and bulletin boards.

“If they [the district] can afford to renovate a fancy new district office, then they can afford to invest in our school. We are sick of trying to learn and teach in a nasty building.”

“It just a shame that our school is literally falling apart, and AISD doesn’t seem to realize how much we need a new building,” said second-year teacher Ivan Gonzalez, one of several science teachers who reported the tell-tale bulging yellow ceiling tile where water pours into his classroom when there is heavy rain. “I feel like we keep putting Band-aids on broken bones.”

Fine Arts Academy director Gabe Reyes said that responding to rain damage is a team effort. According to him, the administrators are trying to be proactive about putting in work orders to improve the structure of the building and resolve leakage issues, but getting to the end result takes time. Reyes said he appreciates the custodians who work hard to respond to the aftermath of rain as well as teachers and students who are not necessarily OK with what happened but understanding of it.

“It matters because it’s [damaging] instructional tools for our kids and we take that really seriously,” Reyes said. “When stuff like that happens across the campus, there are leaks and things like that, the custodians jump on it. As admin, we try to put in work orders as quickly as we can, because that’s our school environment. And it’s important for kids to have a safe, healthy school environment.”