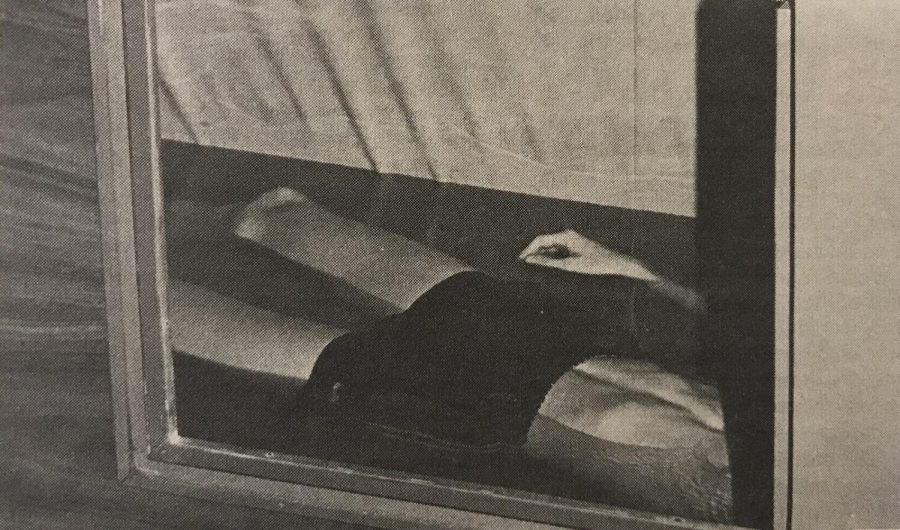 Defying gravity is made simple in any one of the four isolation tanks belonging to Float to Relax, Inc.

Peering into the window of the small office belonging to Float to Relax, Inc., nothing appears out of the ordinary. True, a few of the people there have wet hair, but that is not too strange.

Being reassured, the excited customer walks in and boldly announces “I’m here for my floating appointment!” With these words, the attendant takes me back to a room containing nothing more than a shower, a lamp, a table, and a large white box which take up nearly half the room.

Once alone, I shower and prepare to climb into the box. But first I examine it. On the outside, I find two doors in the center of the box, some pipe coming from one end and leading into the wall, and two large air holes on either side. All in all, it looks like something out of a “Star Trek” movie.

After stalling for a while, it is time to discover exactly what Flat to Relax is all about. Turning out the lights, I get into the box, closing the doors behind me. Inside the box, the odor of salt is very strong, and I discover that in the box with me is about a foot of water.

Lying down, to my surprise, instead of sinking to the bottom, I am actually suspended above the floor, defying gravity. Reasoning that this is due to the high concentration of salt in the water, I quickly become at ease.

While in total darkness, I notice that the water is neither cold nor hot, but instead matches the temperature of my skin. The air is very humid. Off in the distance, a faint thump, thump, thump can be heard. Besides this, however, nothing else is audible.

While trying to determine what is causing the thumping, I actually begin to hear the noise made as my muscles tense and relax. After hearing this, I deduce that the earlier noise was my own heartbeat.

After a short time spent getting acquainted with my new surroundings, I settle in for a relaxing float. Lying still, I notice that I have lost my sense of direction, so much that the tank seems to be doing a 180-degree flip. After an initial panic, I once again relax.

Then the inevitable happened, I hear a soft knock and a voice telling me that my time is up. Coming slowly back to reality, I get out of the big white box and shower. I am still marveling at how quickly the hour passed. After drying off, I go back to the receptionist’s desk where I am greeted with questions dealing with my first float. Then after drinking my complimentary tea, I leave.

It began when Dr. John C. Lilly became dissatisfied with the environments used for experiments on sensory deprivation. With this motivation, Lilly constructed a tank that contained 12 inches of a 20 percent saline solution. It was constructed so that once the doors were closed, the occupant would be in a sound/light-free environment, thus depriving all of his senses of stimulation.

In his early experiments, subjects were trained so as to heighten their experience. After going through a daily routine of exercises and mental preparation, they would enter the tank. Their experiences were then recorded after the float.

“The experience was unique. Never in my life have I experienced an attitude as close to weightlessness, or of being suspended in the simulation of a gravity-free atmosphere,” related one of Lilly’s clients.

Experiments like this one continued for some time. Data collected suggest that an hour of floating “induced relaxation” in areas such as theta brain activity (a cyclic brain wave pattern which is correlated with a state of relaxation) and a general feeling of relaxation, increased in subjects after one hour of floating. Also, the EMG of floaters was decreased. (Electromograph is an instrument used to measure muscular electrical activity.) An increase is related to tension and a lower reading to reduced muscular tension.

Just two years ago, Float to Relax opened an office which houses four tanks. Each is four feet by eight feet by approximately four feet high and is filled with 250 gallons of either Epsom or sea salt. According to Bob Wilcox, an employee of Flat to Relax, different salts are for different people.

Despite the unusual nature of the office, it is frequented by “roughly 20 to 40 people. The ages range between 25 to 30. However, we have had children come in, as well as one customer who was 75.” Wilcox said.

No matter how many people have used the tanks before, a few new customers are nervous and even a little frightened of the tank. The idea of being closed up in a cabinet in complete darkness is a bit unsettling.

“When I went in, I had a moment of paranoia, of thinking that I couldn’t get out, or somebody was going to close the lid on me.” Said another one of Lilly’s customers. To combat these feelings, employees explain a little about the tanks “and allow the customer to keep the light on and the doors open.” Wilcox added, “Once in, however, the people become at ease, and want the light out” This attitude can be seen by Lilly’s client who wen on to say, “than as soon as I began to shift around, to shift my body around and experiment with how to float easily…I began to relax my body….”

So, as more and more people begin to see that the isolation tank and “sensory reduction” as Wilcox puts it, is not such a futuristic way to alleviate stress, perhaps more people will be able to say what one customer of Flat to Relax said, “After I float, I’m a much nicer person.”

This story was originally published in The Shield in April 23, 1982.