Class of ’22 is on fire (figuratively) 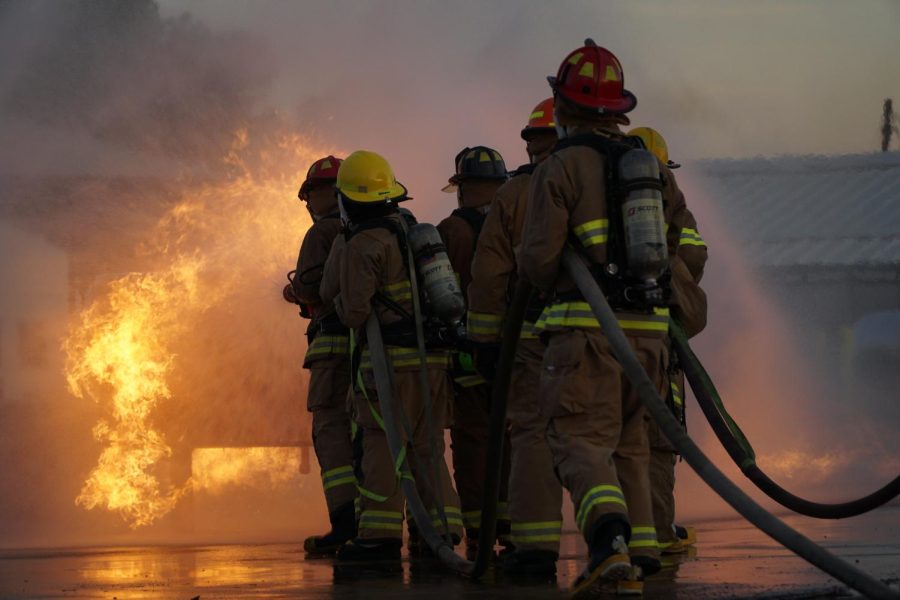 Senior members of the LBJ Fire Academy line up to put out the propane fire at their first live fire skill day of the school year. Each person in the line has a specialized job, first in line holds the nozzle of the hose, the second and third are backup and the fourth person is the hose wrangler, making sure they have enough hose left to turn. “We just had to learn every single job, and that was stressful,” senior and LBJ Fire Academy member Michael Valentino said. “Every person has their job and they have to do it, and if you don’t do it it’s gonna go bad.” Caption by Kennedy Weatherby.

The members of LBJ Fire Academy participated in a fire demonstration on Sept. 25 that required them to put into practice all of the skills learned in the course. The event was held at the Austin Fire Academy and consisted of beating back a propane fire to reach the propane nozzle and turn it off.

We are proud to showcase this annual event, a rite of passage for the Fire Academy seniors as they progress toward becoming certified firefighters and EMT’s,  as this week’s Tuesday Top 10 photo essay. 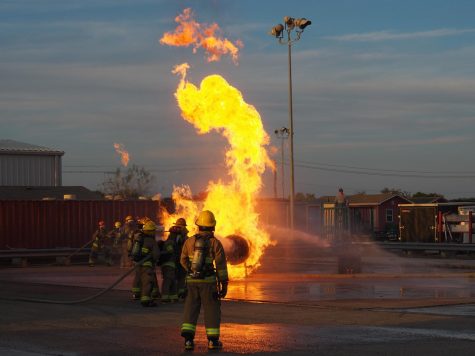 Senior Ethan Holmes, one of the LBJ Fire Academy members, took part in his second Fire Academy demonstration this year. “The program is two years long, junior and senior year” he said. “I’ve been a part of it since I was a junior last year.” Holmes says that the program did a good job last year of providing a well-rounded education and the proper experience for the trainees. “Last year we actually had Fire Academy in person, which was great since there isn’t a way to do all the skills and such online. It did feel a little strange going to one class and then coming home to do the others online.” Caption and photo by Lydia Reedy. 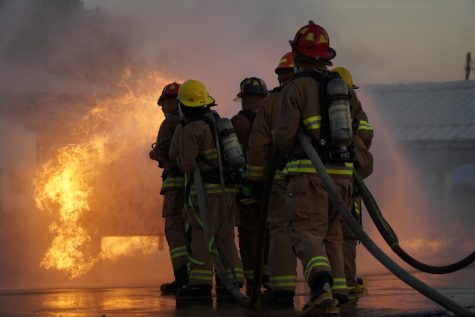 Senior members of the LBJ Fire Academy line up to put out the propane fire at their first live fire skill day of the school year. Each person in the line has a specialized job, first in line holds the nozzle of the hose, the second and third are backup and the fourth person is the hose wrangler, making sure they have enough hose left to turn. “We just had to learn every single job, and that was stressful,” senior and LBJ Fire Academy member Michael Valentino said. “Every person has their job and they have to do it, and if you don’t do it it’s gonna go bad.” Caption and photo by Kennedy Weatherby. 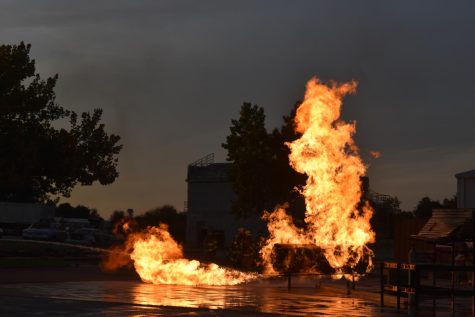 The propane tank of the LBJ fire demonstration is ablaze as students of the academy try and take it out. Senior Michael Valentino, in his second year in the program, is excited for the prospects that the training might allow. “The big payoff for me is that I want to actually go into firefighting,” Valentino said. “Being certified at 18 and being able to go into a station right after graduating is exciting.” The LBJ Fire Academy also has free tuition for certain in-state universities, allowing for more opportunities. Caption and photo by Josie Bradsby. 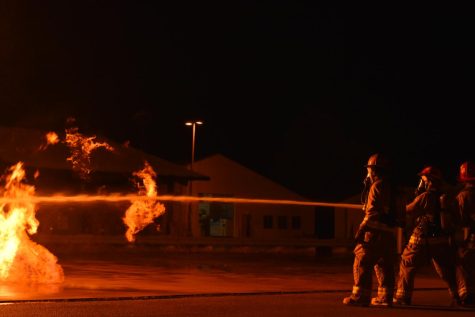 The LBJ Fire Academy propane demonstration involves all of the students of the academy, both juniors and seniors from different Austin high schools, and allows them to show off their firefighting knowledge. “If you pass all the tests and keep your grades good you can qualify to get fire and EMT certified,” senior Michael Valentino said. “We need real-life fire experience in order to qualify for the certificate and feel prepared to go on as either a firefighter or EMT.” The demonstration is one of two live fire events that the Fire Academy trainees participate in. Caption and photo by Josie Bradsby. 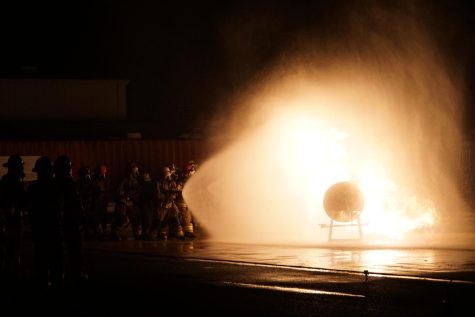 A line of LBJ Fire Academy seniors work together to help put out the propane fire set at one of the Fire Academy’s live fire presentations. Senior Grant Shackelford has been a part of the Fire Academy since the start of his junior year, learning different skills from a textbook, and he finally got to put those skills to use in a real test. “We have a textbook we need to go through, and each chapter is based on a certain skill you need to know,” Shackelford said. “[During the live fire skill day] we used fire attack skills, proper PPE-donning skills, how to deal with an SPBA, which is a breathing pack, and of course team building.” Caption and photo by Kennedy Weatherby. 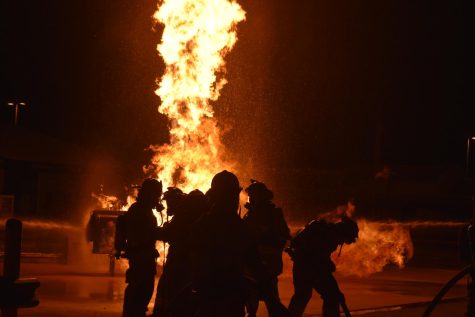 The semi annual fire demonstration is part of skill days, in which the academy go to an AFD training facility and practice their skills and knowledge. “Junior year is Fire One, about a month of senior year is Fire Two, then you go into EMT,” senior Michael Valentino said. “The propane fire demonstration was the skill day for all of Fire One.” The goal of a lot of the participants in the academy is to become an EMT after the program. Caption and photo by Josie Bradsby. 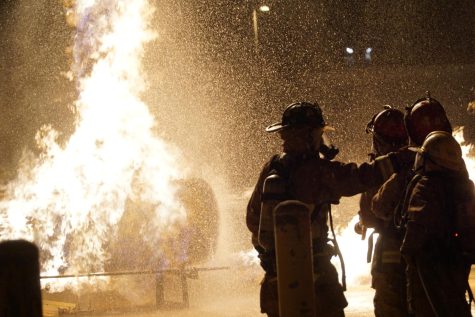 LBJ Fire Academy members talk and work together to put out the blazing propane fire at the live fire skill day on Sept. 25. Senior Nolan Russell is one of McCallum’s four students a part of the LBJ Fire Academy. Russell and his classmates had been preparing for weeks during the Fire Academy class before the live fire on Sept. 25. “Every fifth and sixth period we go and train,” Russell said. “Sometimes it means tests and written stuff, but sometimes we go out and get on our gear. [The live fire] was personally not a challenge because we had trained for weeks before.” Caption and photo by Kennedy Weatherby. 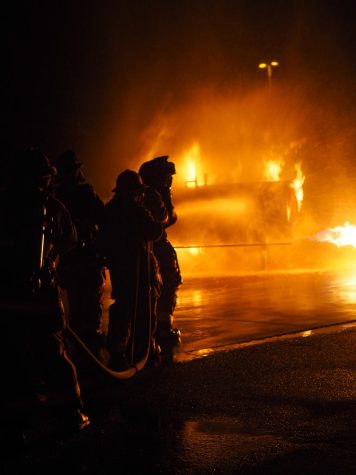 Although fire demonstrations are fun to look at, and friends and family are welcome to come and observe, they are also necessary to graduate from the program. Holmes said that the Texas Commission on Fire Protection, or TCFP, “mandates that we have a certain number of live fire training hours in order to get certified.” According to Holmes, there are multiple skills days throughout the year, leading up to the two live fire skill days. “A lot of our skill days last year were preparing us for the live fire, whether it was operating fire streams, donning PPE, everything kind of came together for the live fire,” Holmes said. Caption and photo by Lydia Reedy. 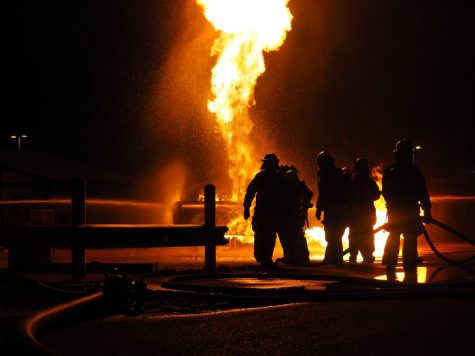 The Fire Academy serves as a source of technical information and practice for students who want to become firefighters. For instance, senior Ethan Holmes plans on pursuing the career after graduating college. The program can also offer experience with responsibility for participants who don’t plan on becoming firefighters. Holmes finds the program to be “just really good life experience.” He elaborates that “It’s physical, it helps build a good work ethic, and the instructors are excellent at what they do.” Caption and photo by Lydia Reedy. 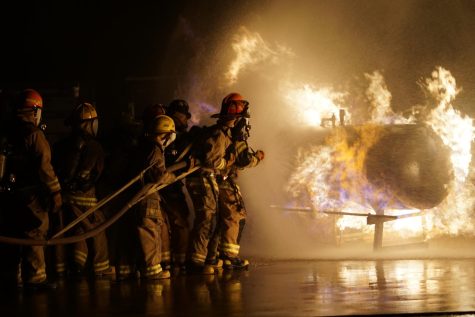 Senior Michael Valentino participated in the LBJ Fire Academy’s live fire skill day that was held on Sept. 25. After a full year of learning about fires, extinguishers, equipment and how to use it, Valentino and the three other seniors a part of the academy put out their first live fires. “It was so cool,” Valentino said. “I ended up doing the nozzle, which is the first person in line, which was super cool, I really wanted to do that.”  Caption and photo by Kennedy Weatherby.