Despite frustrations of online school, social isolation, Emmylou Stephens has flourished during the pandemic by getting creative 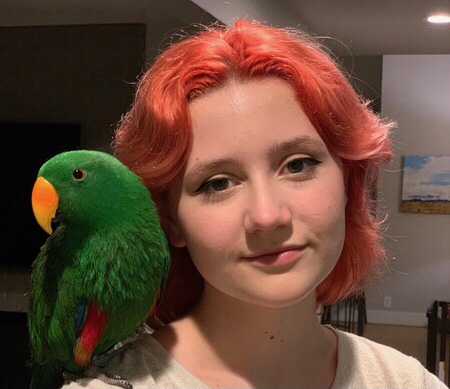 Cinematic arts major Emmylou Stephens stands with her pet eclectus parrot, Sprout. After owning Sprout for the entirety of the COVID-19 pandemic, he has become one of Emmylou’s closest companions.

Purple LED lights reflect off the phone screen as the time changes to 11:12 a.m., the exact minute that sixth-period classes begin. Mccallum freshman Emmylou Stephens sighs in relief. She can join the Zoom meeting of Mr. Ken’s A/V Productions class. Since middle school, video editing, production, and graphic design have been a passion of hers and during a time of online learning, it has become something to look forward to even more.

After spending nearly an entire calendar year with only her brother, parents and pet Eclectus parrot, Sprout, to keep her company, Emmylou has funneled her restless energy into projects and videos both in and out of the virtual classroom. So much had changed so fast and the familiarity of film was been comforting.

Thanks to easy-to-use platforms such as iMovie and TikTok, filming videos (for enjoyment or education) has been one of the few things that she has been able to continue to do during the pandemic and that has followed her in the messy transition from Lamar Middle School to McCallum High School.

“In middle school, I took Principles of Arts and A/V,” Emmylou said. It was a year-long course during her eighth-grade year that introduced her to cinematic arts. Combined with her previous experience of animation and photography, cinematic arts and A/V production felt like the perfect fit. She also began to take graphic design classes, which she has continued at McCallum.

Her love for film production came on rather fast, as before the eighth grade school year, Emmylou had been a successful student as a theatre major at Lamar.

“Whenever she really gets into something, she’s very passionate about it,” said Lily Hobbs, one of Emmylou’s longtime friends and a fellow Mac freshman. “Not necessarily with school, but really anything, like her bird, or makeup, or shows and music.”

Hobbs, who is also a Fine Arts Academy major, (though in the guitar program and not cinematic arts), has seen how Emmylou’s interests have evolved over the years. Back when school was a physical building and less of a virtual portal, Hobbs often helped out with Emmylou’s A/V productions project, whether that was as an actor in a video or as a critical eye looking over the details of a project. Back when Emmylou was a part of the theatre program, Hobbs observed from afar, acting as more of an appreciative audience member and less a helpful assistant.

“Obviously theater and cinematic arts are very different but I like how they’re both creative and how I can work with other people.”

That’s something that Emmylou comes back to a lot. The people. Like so many high school students, the pandemic has left her feeling isolated.

“She stays in her room most of the time,” Miller Stephens, her younger by three years brother said with a laugh. “She likes working alone on filming and stuff.”

That’s one of the downsides of being a cinematic arts student; it isn’t something that you always need other people for. It can be seen as both a blessing and a curse, since compared to other areas of the Fine Arts Academy, such as music or theatre, cinematic arts students have far fewer roadblocks when it comes to Zoom and online learning, due to the already virtual nature of cinematic arts.

So far, many of her projects have been done independently. For example, one of her first major assignments was a “how-to” video, where Emmylou filmed and edited a makeup tutorial on herself.

Currently, she is working on a short film project where she uses inanimate objects as the characters. She has written her scripts to purposefully exclude the need for other people since her options for actors are limited.

According to Emmylou, this lack of group projects and abundance of freedom has made things “less stressful.” In some ways, however, this lack of in-person interaction and community is hard, especially since Emmylou is new to McCallum and has yet to experience her program in person at all. Until she finally goes to classes in person, she has no idea how her current class will compare to what she experienced in middle school or how she will approach collaborating with her peers.

Even within some of her strongest relationships, social interactions feel distinctly different. Hobbs feels similarly.

“Talking to any of my friends in person is a little awkward now, but we text all the time so I don’t think we’re any less close or comfortable with each other,” she said. “I think a lot of my friends have changed a lot over quarantine, not in a bad way, but we have a lot of different interests now that we aren’t spending all our time at school.”

It’s true; Emmylou has changed. From her fashion sense to her taste in shows and hobbies, all of it has evolved as she has entered high school, and her experience as a cinematic arts major has been a constant within the chaos. Going from in-person high school to online high school is bound to come with some growing pains, so she’s glad that her major has given her something to rely on. Through the ups and downs of Covid, the camera has always been there for her. Still, A/V productions and the digital arts can never replace real people.

Despite all the struggles that have come with being a virtual student and the loneliness that has come with the pandemic, Emmylou has been putting in the work to make up for some of what she has lost in the social aspect of her life. Though it’s been difficult being trapped in the same house as her younger brother, Emmylou has been attempting to form a stronger bond with him.

“We get along OK; over coronavirus, she started watching some of the same animes as me,” Miller said. “So now we’re watching Hunter x Hunter together.”

It’s the simplest thing that can remind Emmylou how valuable her interpersonal relationships are and how remembering to take care of her mental and emotional needs are important. Even though she enjoys her major and being a part of the Fine Arts Academy, sometimes the pressure can be overwhelming.

“I’ve been doing online school this whole year,” Emmylou said. “Managing it all on my own can be stressful but at this point, I’m used to it.”

Sadly, being “used to it” doesn’t always mean that it’s easy. When Emmylou was applying to the Fine Arts Academy, she had no idea that her freshman year was going to be 100% online. She’s trying, however, to focus on the positive. Her grades haven’t slipped as much as she thought they would, and even if motivation is hard for students to come by these days, hope for the future school year is keeping her afloat in the sea of uncertainty surrounding mask mandates, vaccine distributions, and schools reopening.

She tries to stay grateful for the opportunities that she has as a McCallum student and values everything that she has had the privilege of experiencing as a major thus far.

“I think if I were in-person I would appreciate it a lot more so hopefully next year I get to actually go into the building!”