The Shield Online • May 19, 2021 • https://macshieldonline.com/37576/entertainment/avas-animations-and-aspirations/ 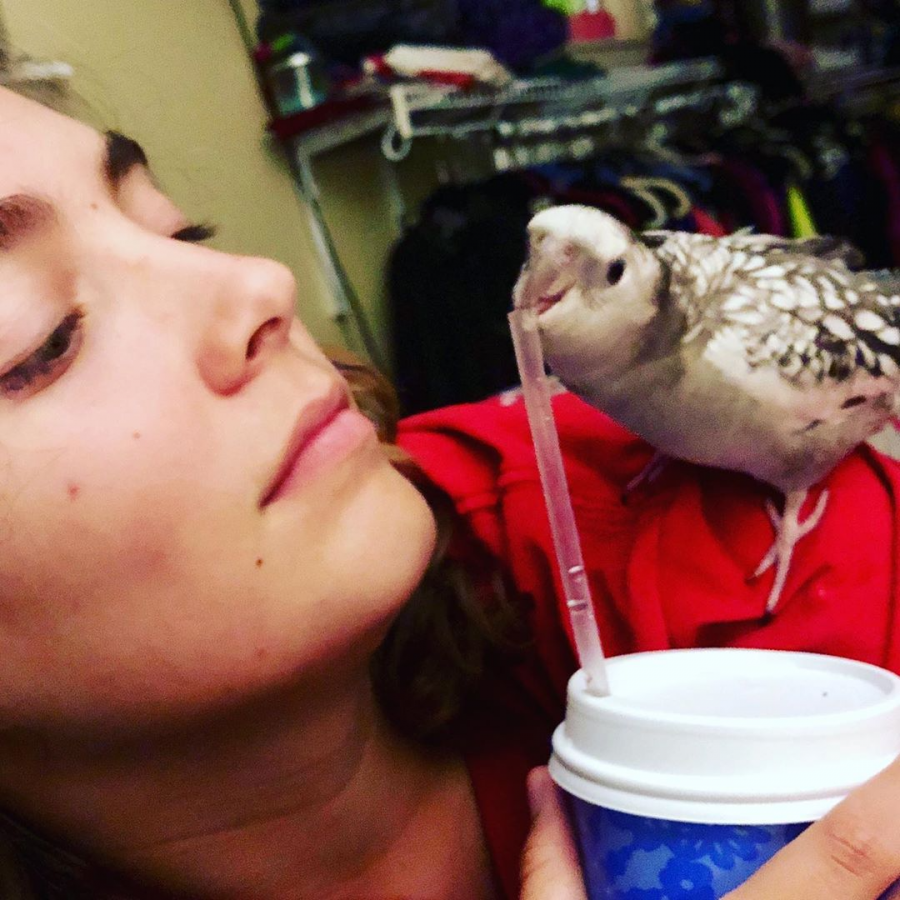 Junior Ava Phillips looks to her bird Leviathan (Levi for short), as he bites the straw of her drink. While she may be the one being perched on in this photo, Levi serves as support and company to Phillips as she spends hours on her animations. "I love my bird with a passion," Phillips said. "He sits with me through all of this. I consider him my production consultant."

A dark red room is full of stormtroopers, each one preparing to attack. A door opens, revealing General Grievous who’s met by a single stormtrooper brave enough to fight—the soldier grabs a weapon and attacks. Red, purple, black, blue, green flash on the screen, fast yet smooth. A series of images, hand drawn and strung together create the illusion of motion in an animation depicting the stormtrooper’s defeat. This scene is the art of animation student Ava Phillips. Phillips, a junior, has worked for hours at a time on just a few seconds of her videos.

“Most of them I despise them after I finish creating them,” Phillips says. “I made one with General Grievous last year that I think turned out nice barring a few scenes.”

Phillips’ animation of the stormtrooper’s attack on General Grievous is a Star Wars: the Clone Wars inspired fan art with each scene digitally drawn by hand. To create her images and combine them into a video, Phillips uses an old drawing tablet that she’s been working with for a few years. While she has been animating for the past six years, three of which she has spent in room 129, the animation classroom, her interest in animation was initially piqued by a film produced in 2010.

“It was How to Train Your Dragon,” Phillips says. “That was the first time I started drawing a lot, and from there I started animating on scratch.mit.edu [an educational coding website]. The fact you could animate on a Chromebook and that you could create and post on the same site was attractive to me.”

Phillips animated on Scratch for around three years until her animations got so long and complex that the site would lag and the music she set as soundtracks would also lag. She graduated to the Adobe Creative Cloud, a more advanced platform that could match her increasingly longer and more complex animations.

The process to create an animation is long and complex as well. Depending on the length and details of the animation, it can be very time-consuming. Phillips can spend two months producing 30 seconds of final animation, working about three hours a day.

“I normally like to animate to music so it comes first,” Phillips says. “I do an animatic (sketches timed to the music so I know what the motion and scene layout will be), then the final color palette and make reference drawings for all the characters I’m using. That’s most of pre-production. Then I do all the backdrops I’m going to need before finally animating the characters. It’s a bit of a hassle, but it gets me the best results of what I’ve tried.”

Animation is a creative process, animation teacher Timothy Carroll explains; it has to do with each individual person and their strengths and what they love doing. What inspires an animator is special to them—just like an author writing a book, animation is a combination of their own ideas. Phillips inspiration comes from music. That’s why music always comes first in her animation process.

“I’ve got a stupid long playlist of collected music that I have ideas for,” Phillips says. “’Think it’s around 200 songs long now. Most of the time if I hear new music I’m thinking about what I would be animating to that, and if I like it, it goes on the list.”

Phillips has known for a while that animation was something she wanted to explore and ultimately pursue professionally. To Carroll, this determination was apparent immediately. When he noticed Phillip’s dedication and was impressed with her skills, he wanted others to see what she was capable of creating.

“Ava had created a digital painting,” Carroll said. “I couldn’t resist sharing in a faculty-wide email. This was a ‘Holy guacamole! Look at what this talented teenager is doing!’ kind of share. Mac teenagers have so much talent and Phillips is a prime example.”

When asked about the most fulfilling aspect of being an animation teacher, Carroll explained the proud happiness he gets when he sees a student like Phillips doing what they love to do.

“What I dig most about this job,” Carroll said, “is helping young people expand their creative powers and their interest in learning. Confession: On a regular basis I get all misty-eyed just seeing Mac kids advance what they can do. Corny but true, it’s an honor to work for teenagers.”

A junior, Phillips has one more year in a high-school classroom before she gets to expand her creative adventures beyond the walls of room 129. As of right now, she knows that animation will be a part of her future.

“I’ve wanted to do this professionally for ages. I don’t think I could stop if I tried.”