For one Austin neighborhood, community during a pandemic began with a song … or two 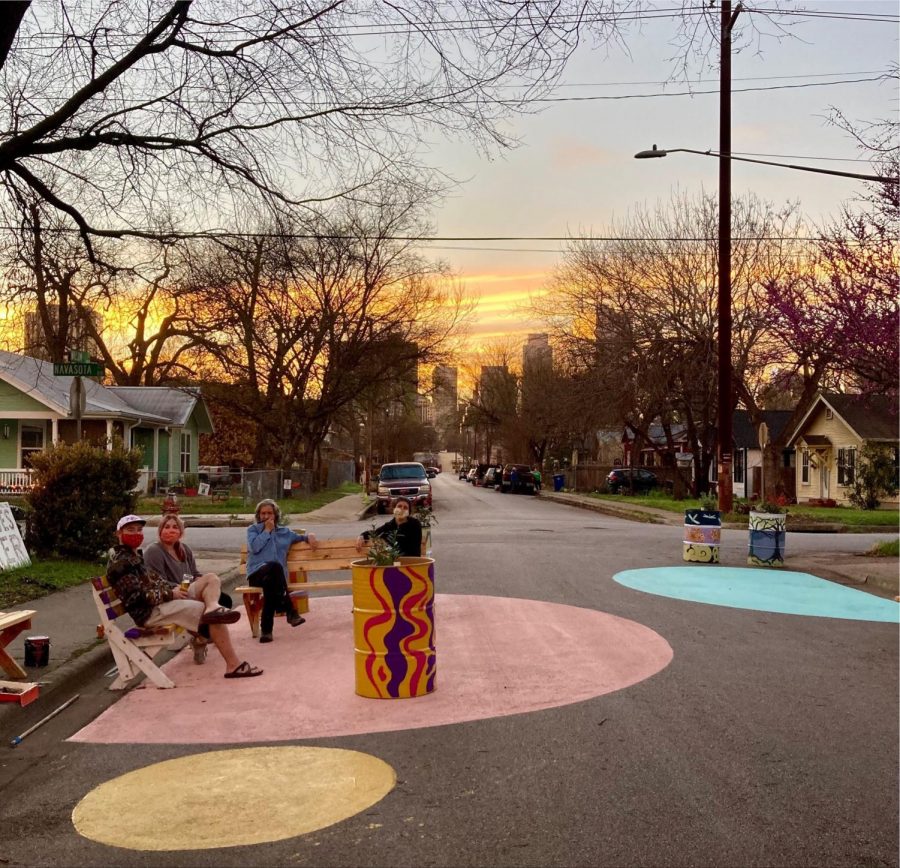 Three neighbors sit on self-painted benches in the street, after a community art event. This moment is an example of place-making to create a more comforting outdoor environment.

As Covid-19 cases persisted across the country, communities, families, and friends have had to find ways to adapt. This has certainly been true for a small group of people in the downtown East Cesar Chavez neighborhood, who knew that community was going to be more important than ever during such unknown circumstances.

It’s 6 p.m., on your average Wednesday night. Kids and adults of all ages gather in the middle of a street under a disco ball that reflects specks of light onto the faces of people as kids run around chasing each other.

The group grows, and Ariel Quintans, a father and long-time member of the neighborhood, brings out his speaker and music floods the streets. Then it happens: people gather in a circle standing next to their family members and start to sing. Whether it’s David Bowie or Katy Perry, every day for the past year, they have come together in the street to sing.

“I know that every day around 5:30 I need to look at my computer to see if a song has been posted,” said neighborhood member Frauke Baylor. For this community, the daily “sing-along” has become a staple of the day, and for many, it is the one constant thing.

This idea was first introduced by Janine Bergin when lockdown began in March of 2020. “I saw these videos of people standing on their balconies (in Italy) all singing at a certain time of the day,” she said.

She was instantly inspired, and after sharing the idea with neighbors, the first sing-along took place in March 2020. That first day, around 10 families gathered, masked and distanced from the other families, in the street in the shade of a large tree.

“[The sing-along] has been a way to stay connected and not feel so lonely and isolated. The one safe thing we could do was step outside our front gate and see other people,” Bergin says.

Since then, the number of safe activities organized by this group has only grown with each event observing COVID-19 safety protocols such as masking and distancing. During the 2020 election, a large projector screen was placed outside in one neighbor’s yard, where NBC’s election results were projected onto the screen. Neighbors gathered and sat on lawn chairs and blankets discussing the results.

“Going through [the 2020 election] collectively, with other people, made a lot of a difference,” Baylor said, showcasing one more way the group has stuck together.

But that’s not all: a theatrical performance, a Christmas party, and birthdays have all been observed by the group to help create a measure of normalcy. At each event tables were set up on the street and neighbors brought food to be shared. For the theatrical performance, a makeshift stage was created through the use of a hanging white sheet, and five children performed a play of their own creation.

For many in this group, a unified community such as this didn’t exist until the arrival of Adam Greenfield and Amy Concilio in 2015. Adam is a “community organizer” a phrase that he defines as “harnessing peoples’ support and abilities towards a unified goal.” Since then, the couple has made it their duty to create a group out of a collection of unsuspecting neighbors.

“The sing-along has become a big thing,” Adam says. “You don’t even have to sing during it; you can just show up, and that is enough.”

He also acknowledges, however, that the pandemic has made it difficult to continue to help this group grow.

“The other thing that I have been working on is what they call place-making,” he said, “which is contributing to the physical environment to make it feel more welcoming.”

Place-making has been one key way for him to establish the appearance of a welcoming group. Christmas lights, colorfully-painted benches, a community bulletin board, a disco ball and artworks have all gone up in an effort to carry out place-making, and to make those nightly sing-alongs even more like a party.

Not only has a community grown for the adults, but it has also provided new opportunities for families and kids. Sarah Arvey, a mother of two says that the community serves as an anchor for the family, helping her and her kids adapt to the changes in the world.

“The (sing-along) is like a close-of-day ritual,” she says. “It’s so consistent.”

Not only that, but over the past month, as the community has grown, a large group of children has formed. Unlike one year ago, when children rarely played outside, groups of kids can now be seen walking the streets with masks on.

For many, the appearance of kids has been welcome.

“For the kiddos, being able to go out and see their friends I feel is something that a lot of people aren’t able to do. Everything from the social interactions to getting out and being physical is amazing” father Ariel Quintans says.

Kids are not the only ones who benefit from these interactions.

“I’m a grandmother, and I miss my grandchildren so much, that just seeing children every night added a measure of joy,” Bergin says

Not only has this group been forced to adapt to COVID-19 visiting restrictions, but they have also done it gracefully. They have proved that a community is more than just a group of people with similar interests: they are a family.