A letter from Generation Z to the new vice president

An idol in the eyes of millions of young voters, Kamala Harris can convert their hope today into a better tomorrow 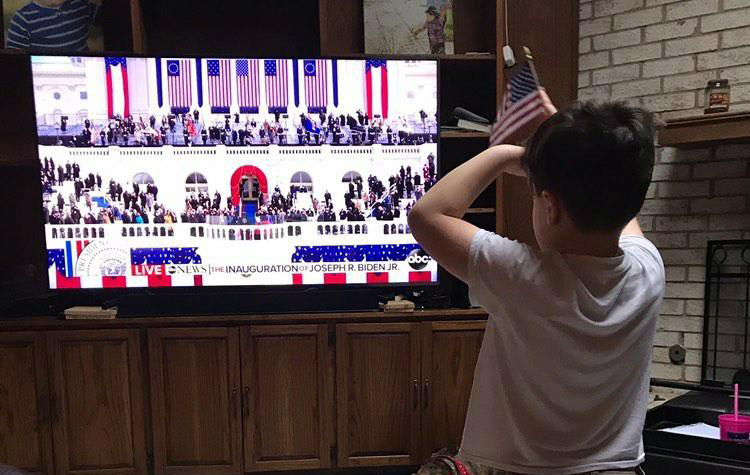 Watching the inauguration from his home on Jan. 20, Alpha Noack, 7, the son of science teacher Sarah Noack, waves his flag and pretends to take the vice presidential oath along with Kamala Harris.

My name is Alice, and I’m a high school freshman.

A record-breaking 161 million Americans voted in the 2020 election. Generation Z played a significant role in this demographic, with 65% percent of eligible voters participating in this year’s election. Unlike the generations before us, Generation Z is in line to inherit a divided society with record-breaking low employment. With the introduction of COVID-19, our perilous future has accelerated.

Statistically speaking, Generation Z is more diverse than any previous generation and is on track to be the most well-educated generation yet. Gen Z’ers tend to be more progressive and have a hastened interest in political issues due to the constant exposure of the nation we will one day inherit. We have a promising educational trajectory, one where high school dropout rates will decrease, and college will be more accessible; however, the pandemic has indescribably altered Generation Z’s future.

Just in our early adulthood or teenage years, we face countless daunting challenges. Predominantly, the coronavirus has impacted Gen Z’s finances and careers, which are undoubtedly vital attributes to a promising future. This impact ranges, with high schoolers scrambling to acclimate to online learning, which requires various transition periods. Participating in the short years of school, which impact one’s future is a formidable challenge, faced by merciless quotas and funding requirements.

Rather than focusing on the success and overall well-being of high school students during this uncertain time, schools and districts focus on meeting the unforgivable demands imposed by the U.S. or state government. Consequently, a record-breaking number of high school students are failing classes or are struggling with debilitating mental health issues.

Why is this incessant issue not being combatted?

Admittedly, I have no answers. The Trump administration made no effort to recognize this issue, let alone take a proactive role in rebuilding the ruin that the high school population is heading toward; however, upon your vice-presidential election, I gained hope in the prospect of resolving this increasingly impactful issue on America’s next generation.

I firmly believe that you can foster a connection with Gen Z and act as an ally in combatting the pressing issues that my generation faces. You are an idol in the eyes of millions of Gen Z’ers. Your election symbolizes much more than a vice-presidential win. It symbolizes hope, as you have opened a door to a better future for countless people.

You represent the people whose voices are ignored. You represent every person who faces oppression. You have made history and will pave the way for the countless others who dream of following in your footsteps.

In light of that, an entire generation is counting on you to not only care about the issues we face but to help resolve and prepare us for combatting an unquestionably difficult future.

As a high school student, I can speak for millions of teens needing a powerful voice that will fight for our well-being and our future as the nation’s working generation.

We cannot be treated as if we are expendable. We need to be treated as an investment if you will. Our overall well-being should be prioritized over the numbers that seem to represent our worth.

We should focus on cultivating vital life skills, such as making resumes, communication skills, taxes and financial literacy.

Despite these skills being essential to success, they are often overlooked and inaccessible. I hope that you can create change and fight to set us on the right path.

Additionally, I hope you fight to combat debilitating unemployment for young people. Across the nation, internships are being canceled and countless jobs are being lost, most affecting society’s young people. With crippling educational debt and financial instability, most young people are in no position to counter this perilous reality.

With no defense intact for Generation Z’s working population, we remain increasingly vulnerable. With complete genuineness, I dream that you will recognize the alarming issues we face and be proactive in resolving them.

I thank you for your time and await the impact you will make.