Knights react to a week in Washington that began with insurrection, ended with Trump’s second impeachment 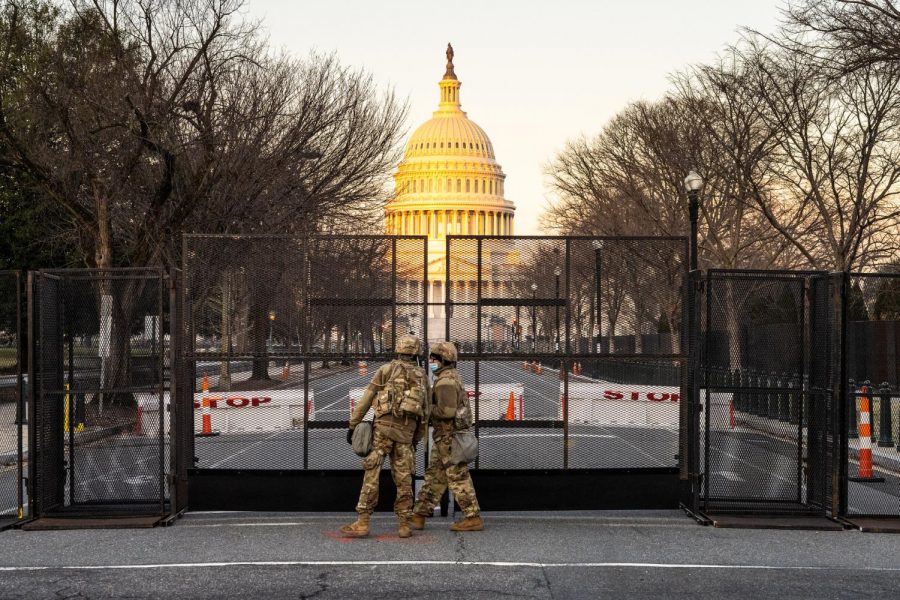 U.S National Guard troops stationed at the entrance to the U.S. Capitol on Wednesday, the same day the House voted to impeach President Trump a second time on the charge that he incited the insurrection that occurred at the Capitol the week before. National Guard troops will be stationed at the Capitol at least until Biden’s inauguration. Photo accessed on Geoff Livingston’s Flickr account. Photo reprinted with permission under a creative commons license.

President Trump was impeached on Wednesday by every House Democrat and 10 House Republicans who accuse the president of inciting the insurrection at the U.S. Capitol, which occurred exactly a week before the House voted on the article of impeachment.

On that Wednesday, which Senate minority leader Chuck Schumer said would live in infamy every bit as much as the day of the Pearl Harbor invasion, Trump supporters gathered at the steps of the Capitol to protest the outcome of the presidential election while Congress counted votes confirming Joe Biden’s victory, eventually breaking past law enforcement and breaching the interior of the Capitol building. Police evacuated Vice President Mike Pence, who was threatened by the mob due to his acknowledgment of Biden’s win, as well as House and Senate members.

The insurrection has resulted in six deaths, including one woman shot and killed by law enforcement while trying to push her way through a window to the Senate floor and one Capitol police officer who died in the hospital after being struck in the head with a fire extinguisher while defending the Capitol. Another Capitol police took his own life days after responding to the attack. Three rioters died from emergency health complications. Officials also recovered two pipe bombs and a cooler of Molotov cocktails while responding to the breach.

McCallum families watched the awful events on televisions, on computer monitors and cell phones, outraged as a four-hour siege of the Capitol played out on news networks for all to see.

“I think this event is going to be known as a very dark day in history,” junior Zara Terrazas-Graham said. “This event made me incredibly disappointed and embarrassed to be an American.”

The riots followed the Save America Rally, where hundreds of Trump supporters amassed at the Ellipse Park near the White House. At the rally, President Trump continued to discredit the election with claims of fraud without any evidence and to exhort the crowds to march on Capitol Hill.

“We will never give up. We will never concede,” declared Trump during his rally in front of the White House. “You don’t concede when there’s theft involved. Our country has had enough. We will not take it anymore, and that is what this is all about.”

Junior Caitlin Mitchell felt that Trump’s words were a major instigator of the violence that occurred and the distrust of the democratic system.

“I do believe that [Trump’s words] have opened the door for a more public display of white supremacy and alt-right ideology,” Mitchell said. “His response to the behavior of these alt-right individuals definitely threw gas on the fire.”

A majority of respondents to a Shield Online poll believe that Trump’s role in the events of Jan. 6 are grounds for an early end to his presidency: as of Thursday morning, 91 percent of voters (73 out of 80 respondents) said they believe that Trump should be removed from office before Inauguration Day after witnessing the events that occurred at the Capitol.

Despite the fact that Trump asked his supporters to leave the Capitol, Mitchell believes that Trump’s response to the invasion did not quell the feelings and beliefs that caused the breach in the first place.

“His wording in his speech asking them to step down, I think in almost a covert way, he was coaxing them on to continue to create this environment that will not allow us to proceed to the next president,” Mitchell said. “The last four years has been a lot of a reversal of the taboo that was white supremacy.”

Princess Gant, a junior, said that Trump’s provocative speech was not fully to blame for the violent events that followed, but she also believes that his presidency has given power to groups of people who are willing to commit violent acts to fight for the president’s agenda.

“[Trump] promised all of these things, and those people expected those promises to be fulfilled. Some haven’t been fulfilled, which is why they’re so keen on keeping him in office. Because they know that when he’s out, all those promises will go away, and all the things that they have gained will go away as well, and they’re not ready to give up that power.”

Psychology and government teacher Robert Bucher attributes mob mentality and confirmation bias to the events that unfolded at the Capitol.

“You see groupthink, the mob mentality, and confirmation bias is always also at work,” Bucher said. “They’re not listening to anything else, they demonize the other side. Whatever comes from that other side is automatically fake news. False wrong, it’s the enemy. It’s tribalism. They’re only identifying with their tribe, and they’re willing to burn everything down; combine that with the frustration and desperation of the economy and the pandemic and boom an insurrection.”

Violence between police and the mob had been ongoing for over an hour while the Senate debated whether to ratify Arizona’s votes. Two minutes after the first rioter entered the Capitol, the Senate was called into recess as the mob reached the stairs near the Senate chamber. With hundreds of people surrounding the Capitol, the House was called into recess and while some members of Congress were able to evacuate; others stayed trapped inside while rioters pounded on the doors.

“I thought we’d either have to make a last stand or fight our way out,” former Army Ranger, Iraq veteran and current U.S. Rep. Jason Crow, D-Colo., told The New York Times. “It was pretty hairy.”

According to the account of New York Times reporter Emily Cochrane, rioters went door to door looting offices of congressmen and senators, waving confederate flags, vandalizing and stealing items like mail and the speaker of the house podium, and chanting “Give us Pence” and “Take the Capitol.” Many rioters were also found to be armed with their own chemical weapons as well as restraints like flexible handcuffs.

Four hours after the initial break-in Congress’s sergeant-at-arms, Michael Stenger and Paul Irving, who have both since resigned, declared the Capitol building secure. As of this Wednesday, DC police reported that over 79 arrests have been made across 20 states for charges amassed at the Capitol, many being violations of the 6 p.m. curfew instituted by DC Mayor Muriel Bowser that night and unlawful entry charges.

Gant finds the disconnect between the two responses upsetting.

“When Black Lives Matter [protestors] are simply standing in the streets holding their fists in the air and holding signs … they get shot with rubber bullets for nothing,” Gant said. “I just feel like there’s no way to explain why that’s happening other than the color of their skin. I’m sure you can imagine how angry that makes people of color, to see so broadly the difference between the way that the government sees us, and the way that the president treats these individuals, is insane, and it was shown very obviously [on Jan. 6]. So there’s a lot of pain in the POC community right now, because the way that they handled Black Lives Matter was with brute force. A lot of people died, and the way that they handled this terrorist act was basically politely asking them to leave.”

Language arts teacher Eric Wydeven agreed but added the racism is caused by systemic discrimination that goes far beyond the racism of an individual or even a group of individuals.

“I think we can certainly attribute [this disparity] to racism. The problem is, I have trouble pointing the finger at any one human and calling them out as racist. My finger-pointing is more at the nation itself. Not that we are all racist, but I do think we have trained ourselves to be racist as a culture. Due to our history with racism and the narrative early Americans had to come up with to justify subjugating another group of people into chattel slavery, we have created an inherent system that is itself racist. I believe that humans, by and large, are communal people, out for the good of all, but that we have created systems that have tricked us into believing some things are more important than human goodness and to let people alone to live their lives, so I blame human greed, materialism and the behaviors we have had to develop to meet these constructed need.”

Although the violence and the casualties were a source of pain across the nation, Wydeven holds out hope that it might be a catalyst for a new political atmosphere.

“We are on the edge of a huge cultural shift that is akin to any of these others, like the shift to postmodernism and the shift to modernism, all exacerbated by the coronavirus and the new recognition of all of this institutional racism,” Wydeven said.

Terrazas-Graham agreed, especially after seeing some Republican senators and representatives who had planned to object to certifying electoral votes in contested states changed their minds and seeing members of Trump’s administration resigning in protest.

“I think [the Capitol insurrection] convinced many Republicans to stop excusing the actions of the lunatic in office,” Terrazas-Graham said. “It makes me hopeful. I really hope that some Republicans realize the mistake made when Donald Trump was elected and hopefully our democracy won’t be threatened like this again.”

Bucher believes that threat began with the president’s remarks at the morning rally outside the White House.

“President Trump did incite violence,” he said. “Free speech is protected, as long as you’re not running into a crowded movie theater and yelling fire. You cannot create a clear and present danger that you could go to prison for. And it is a textbook case of sedition inciting violence against the authority or the governing authority of the land. That’s the addition. And that’s exactly what he did.”

In yesterday’s impeachment vote, 10 Republicans saw the president’s role as inciting the insurrection, and Senate Majority Leader Mitch McConnell reportedly told associates that he believed the president committed impeachable offenses, but he also announced that the Senate impeachment trial will not commence until after President-elect Biden’s inauguration.

— with reporting by Evelyn Griffin and Samantha Powers