Running McCallum, then and now 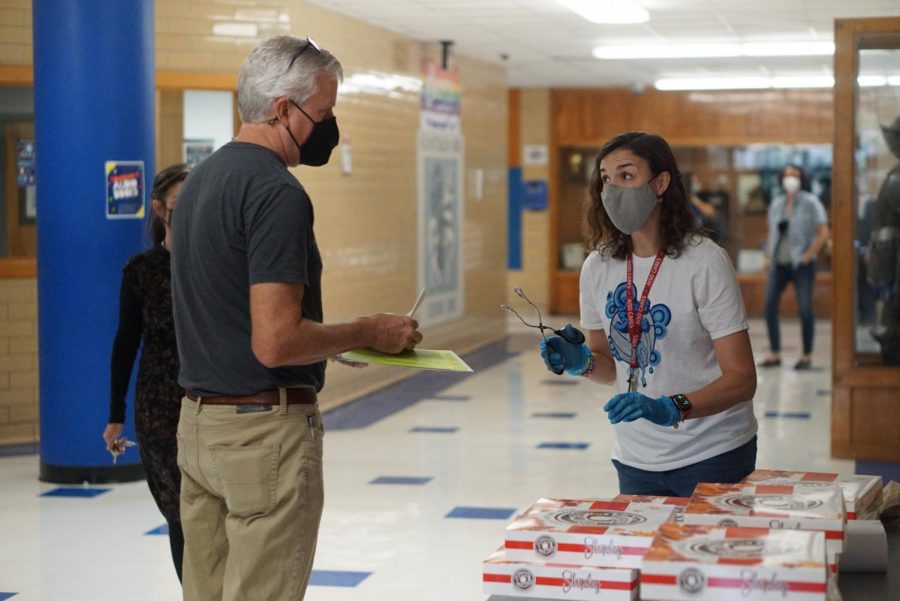 Decades after her high school experience, former Knight Camille Nix has returned to McCallum, this time as part of the faculty.

Even though she is returning to the campus as the new building manager, Nix doesn’t feel as if much has changed.

“It’s a bit surreal. On the first day I was walking down the hall and noticed a painting hanging that is [by] a friend of mine,” Nix said. “We’re 20-plus years removed from high school, and his painting still hangs. I took a picture of it and sent it to him saying ‘your thumbprint is here forever.’”

While Nix feels that Mac has stayed relatively the same over the years, she does notice that Austin as a whole has grown considerably. Nix has conflicting feelings about this.

“Some old Austin institutions have really struggled to make it,” she said. “That really makes me sad because I grew up with a lot of those things. They make up a part of Austin that I really love. But I also think that the development has made our culture grow and brought neat food and art and music venues that weren’t around before.”

Nix has always harbored a passion for language arts, and her English teachers at McCallum motivated her to become a teacher in the subject.

“I had teachers at McCallum who really inspired me,” she said. “What made me want to become a teacher were the great teachers that instilled in me a love for reading and writing.”

After graduating from McCallum in 1996, Nix went on to study at UT, and then held a variety of positions at Austin High over the course of 20 years. There, she taught English, AVID and coached volleyball. However, these positions still weren’t quite right for her.

“When I was in the classroom, what I enjoyed most was the relationship with the kids—not necessarily the content,” Nix said. “I figured that out while I was coaching. I really enjoyed connecting with the students one on one.”

Nix found other aspects of teaching, such as grading, to be overwhelming, so she decided to become a counselor.

“I was looking for a way to still be in the school and work with students,” she said, “but I didn’t want to go home with hours and hours more to do after I had worked all day.”

After a few years working as a counselor, she decided to find a job closer to home, both physically and emotionally.

“I live about five minutes from McCallum,” Nix said. “Working at Austin High, the commute was a solid half an hour.”

Her special connection to Mac also helped her make the decision to come back and make a career change.

“I always wanted to end up at McCallum,” she said. “I graduated from McCallum, and I think it’s a really special place. I had been looking for an opportunity to get [a job] there for a while. COVID gave me the push I needed.”

Now, Nix has joined the Mac faculty this year as building manager. Although her job now has a few critical differences compared to counseling and teaching, the most fulfilling parts remain a constant.

“I oversee facilities, work with staff, and make sure the building is running as it should,” Nix said. “I also manage any events on campus and assist the principal. It’s a very different job, but it still helps people, and that’s really what I enjoy.”

The welcoming environment provided by the school and its faculty has made her transition relatively smooth.

“The people here are so friendly. From the custodial staff, to clerical staff, to teachers, to APs, to all the students,” she said. “I’ve been really impressed and appreciative of how kind and helpful everybody is.”

Nix has never had issues meeting new people. She has a compassionate nature.

“I think that I am able to feel empathy for people [easily]. I love to meet people, especially in new places.”

Through travel, Nix has had the opportunity to do just that.

“Costa Rica and Italy were some of my favorites,” she said. “In New York City we loved to see the shows and the energy of the town. And in Maine I love to go whale watching. It’s like they’re putting on a show for you, and it just feels magical.”

Of all the places she’s visited, the most significant in her memory is in Spain, where she studied abroad.

“That was such a special time in my life,” she said. “It was something just for me, in a place that I got to choose.”

Along with being a world traveler, Nix is also an avid reader, constantly working her way through stacks of books about whatever she’s currently interested in.

“I’m a constant, lifelong learner,” she said. “I love to read and I love to learn and I love to ask questions about things, and also about people. Part of how you form relationships is getting to a place where you understand what makes each individual person different.”

Even under these unique circumstances, Nix is happy to be at McCallum,. She is grateful that the school’s COVID-19 safety precautions have allowed her to feel safe in her new environment.

“I think McCallum has done a fantastic job of making boundaries and rules very clear,” she said. “I’d be lying if I said that [working during a pandemic] hasn’t come with some anxiety, but it helps that people are masked, and the kids have been really good about following protocol.”

Working as building manager has enabled her to continue to connect with both students and staff, her favorite part of her job.

“I thrive on being around people, So COVID has really been hard, but everyone here is so friendly—even though it’s weird to have met people and not know what their mouth looks like.”