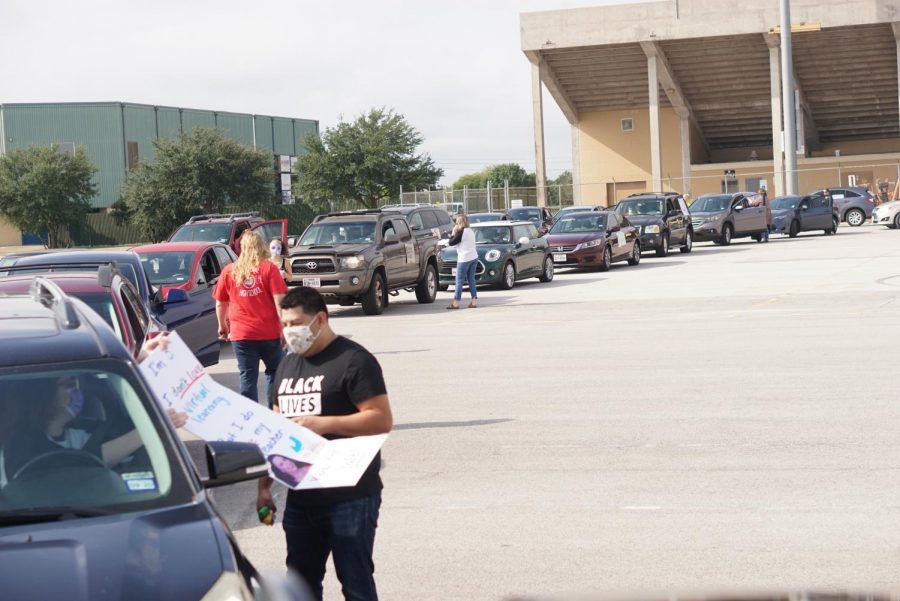 The rally, organized by Education Austin, began at two separate locations at Burger Stadium and Nelson Field, where cars then caravanned to the Southfield headquarters. Photo by Alysa Spiro.

AISD staff and community members gathered at the district headquarters on Saturday to post questions and demands they had regarding school reopenings and the district’s COVID response.

The rally, organized by Education Austin, began at two separate locations at Burger Stadium and Nelson Field, where cars then caravanned to the Southfield headquarters.

Ken Zarifis, the president of Education Austin, said the purpose of the rally was to provide a platform where staff members directly affected by the reopenings could make their voices heard.

“The union is 3,000 employees of the school district…that’s teachers, TAs, bus drivers, custodians: it’s the loudest employee voice in the district, and I think the superintendent and the school board would be well served to listen,” Zarifis said.

Along with requesting more transparency and a greater staff involvement in the district’s decision-making process, an overwhelming majority of the educators attending Saturday’s caravan favored continuing online learning for the safety of students and staff.

“We should continue, except for the most at-risk students who need face-to-face interaction, (with at home learning),” McCallum social studies teacher Robert Bucher said. “I understand that we have to go back eventually, but what is this accomplishing? If your student can stay at home, stay at home. They are going to value at home (learning) way more than online in a tiny box.”

McCallum librarian Jain Thompson, who doesn’t qualify for accommodations even though her son is at high risk, also called to continue at home learning.

“If I’m forced to supervise a pod, I can’t do it. It’s not safe. That’s just the science, and it’s really infuriating that they’re not acknowledging that.” Thompson said. “Our students and their families get a choice over whether or not to come back to school, but what about their teachers?”

For more in-depth coverage on the rally and AISD’s reopening plan, stay tuned to the Shield Online.