In a strange yet effective way, principal Hosack's teen years prepared her well to be the leader she is today 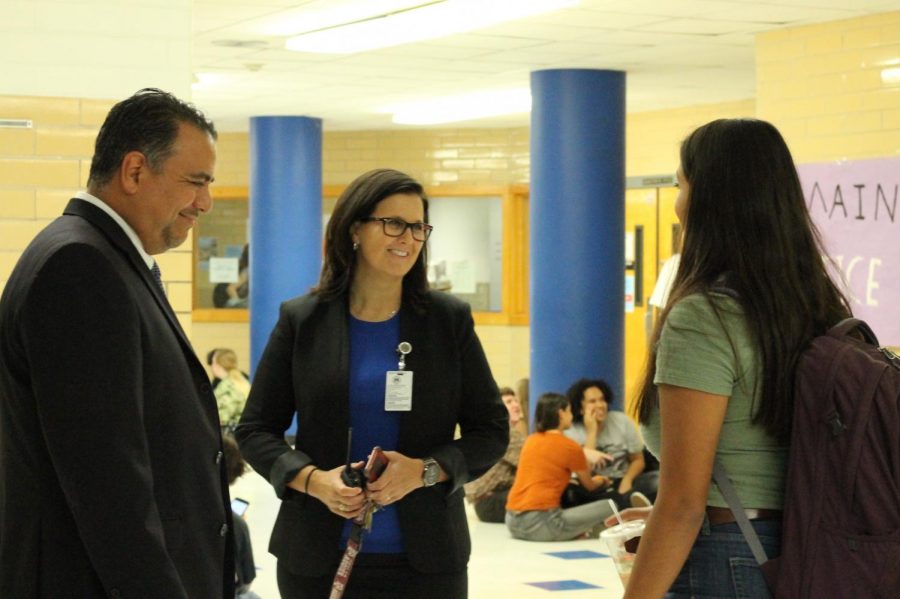 A girl, no older than 17, walks nonchalantly through the halls of her old, small town high school. She glances down at her beat up Doc Martens, red flannel, and considers the schoolwork she must complete before her big game that evening. She passes a few friends, waves and laughs, and turns up the volume of her headphones, Nirvana filling up her world and drowning out everything else. She smiles. Who could she be, this mysterious high school student so full of drive and 90s fashion trends?

None other than McCallum’s new principal, Brandi Hosack.

With the Dec. 16 announcement that Ms. Hosack will officially fill the role of Mac’s permanent principal going forward, the staff and student body know a certain amount about her. Brandi Hosack came from a different school where she was also the principal. She loves her family very much. She is an advocate for leadership and has installed new procedures at McCallum to encourage students to become leaders on campus.

But what about her favorite alternative band from teenagehood? Or the way she got accepted into college through her stellar softball skills? Growing up in a small town in Texas, a completely different version of who we know as our principal existed, driving around town with her friends and teammates and jamming out to Radiohead and Pearl Jam. From quirky after-school hangout spots to the fashion and atmosphere of her tiny high school in East Texas, Hosack’s teen life taught her both lessons that apply to her role as a principal and ideas she invites students at McCallum to consider during these formative years of their lives.

Between softball, basketball and volleyball, Hosack spent the majority of her hours not devoted to schoolwork on the field, the court, or in the gym.

“In middle school, I played… well no, I attempted to play trumpet, but it was like screeching cats in my house,” she said with a laugh. “But in high school, everything centered around athletics. … I made good grades, I was in NHS and all that, but sports was really what I did.”

Hosack described her overall high school experience as “walking the line” with her coaches, mother and her long-term goals keeping her in check to maintain academic success.

“I was internally motivated to do things like get good grades because I wanted scholarships. I wanted to play,” she said. “So I don’t really think that other than wearing clothes that my mom didn’t want me to wear or listening to music that my parents didn’t approve of or dating a boy that they didn’t particularly like, I don’t think that it went much further than that,” she said.

Further reminiscing, Hosack said that the other major component of her high school experience was, of course, the fashion of the era.

She also expressed her glee regarding the return of these trends.

“Are you kidding me? I just bought a new pair of Docs the other day!” she said excitedly. “I was like ‘They’re back! I can have them again!’”

While Mac students have the after-school and weekend options of going to local restaurants, enjoying the live music scene or countless other city-centric activities, Hosack and her fellow classmates had a more limited selection.

“There was nothing fun to do,” she said. “There was a movie theater with like four screens; we were a small small town.”

She and her friends, however, identified an alternative.

“It doesn’t happen anymore, but back then we went to what was called The Square.”

The Square, Hosack described, was the block bordering her high school, composed of four stop signs and countless memories.

“You would pass each other really, really slowly and have conversations, which is so crazy to even think about, because it was what we thought was normal,” she remembered, laughing. “So when you were tired of driving one direction, you would be like ‘OK, I’m gonna turn around in the other direction now,’ so you could see all the people on the other lane. … Maybe you met somebody new, or you saw your friends or you saw the person you didn’t like, or whatever. I can’t tell you how much gas, how many miles and how many hours I spent just circling The Square.”

The charm of small town East Texas, however, did not extend to all aspects of her high school life, and the status quo came as a certain rigidity among the students.

“Conformity was an expectation,” she said. “If you didn’t fit the norm, then you were othered, pushed aside, or it was noticed that you were different, and different wasn’t OK then.”

She recalled the student environment being “vanilla,” and said that the distinctions between her classmates, in complete contrast to what students at Mac are used to today, was minuscule.

“The spectrum of differences was not very deep. You are maybe one degree of separation from anybody else … and none of us really knew any better at that point.”

Hosack described her experience at Mac and her experience as a high school student as “night and day,” expressing extreme gratitude for the diversity and differences found at the school serves as principal.

“[My high school was] dramatically different from McCallum, where it’s OK to be who you are, and in fact it’s celebrated for you to be unique in your own way,” she said. “The depth of understanding in people your age at McCallum is so different, and I love that you guys can be who you are and are unapologetic for that, and I wish I would’ve had that in high school.”

She stated that, in fact, that her experiences in high school guided her the leadership she practices as principal in an unexpected way. Her prior experience teaches her not to base McCallum experiences upon her own.

“I did what I was supposed to do in high school,” she reflected. “ I made straight A’s, I played sports, I never got in trouble, and I think when I first started teaching, I was heavily shaped by that because I couldn’t understand … how come every student couldn’t just do what I did? And then I kind of realized, oh! It’s because they’re not all like me — that’s a very egocentric way of looking at things.”

She described how she then made it a goal to steer in the complete opposite direction from these initial ideas.

“I think there are students that are like who I was, but I don’t think that’s the norm. I don’t really think there is a norm, honestly. … It was a very small box that I fit into at that point. I think a very small percentage of students would say they are like I was. I fit one mold, and every student fits a different mold, and in fact I wish I would’ve pushed my boundaries a little bit more in high school.”

Despite this, Hosack stated that some of her fondest memories are from her teenage years, and she encourages students to truly soak up each moment of their high school experience.

“Although I know that you guys are just dying to graduate and get out of here and go about your life, which is fantastic and you should want to do that, slow down just for a little bit and enjoy it, because there will come a day where you look back on it and wish you could go back. Don’t rush through it, it will come to an end sooner than you think.”

In this time of isolation and uncertainty, perhaps this message can be taken more to heart than ever. At least in terms of gathering on campus, the end of this school year came way sooner than any of us expected, but Ms. Hosack’s words can still be applied to every situation we encounter — not only in a school setting, but each moment spent with our family, each Zoom call with our friends and teachers, and each silly trip around The Square.