COVID-19 was a disruption in his life, but it also gave math teacher time to finish his long-awaited album 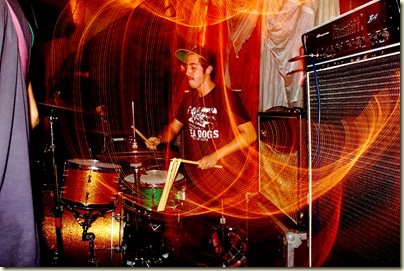 Daniel Vega plays the drums with his band Zlam Dunk during the band’s third tour. Vega said he wasn’t sure where and when the photo was taken but his best guess was that it was in Philadelphia in 2011. “It was the longest tour we ever did,” Vega recalled, “roughly five weeks on the road, living in a van and crashing on floors. Best time of my life, other than getting married and teaching at McCallum obviously.” The extended spring break gave the math teacher the chance to realize an album project that has been four years in the making. The album, "Decade" by Crooked Numbers, was released on April 1 (no fooling). Vega wrote all of the lyrics and music for the album and compiled drums and bass recordings from four years ago along with more recent guitar, keyboards and vocal recordings. “I have been playing drums most of my life … and this album has been a long time coming,” Vega told MacJournalism. “I’ve been working on the songs since around 2016, but when you have a full-time job and a life, music kind of gets put on the back burner.” Photo by Danny Garcia (probably).

When current math and computer science teacher Daniel Vega started work with lead vocalist Charlie Day on the six-track album Decade, the world was still mourning the deaths of David Bowie and Prince, Donald Trump was making the late-night talk show circuit, you could still find crowds of people in the park hunting for Pokemon with Pokemon Go, and the class of 2020 was in eighth grade.

But now, after four years of work, the new album is finally ready.

The roots of Decade can be traced back to 2008, with the formation of Vega’s first band, Zlam Dunk. Vega made music with Zlam Dunk for the next six years, releasing a studio album and touring the country several times.

“We broke up around 2014, because we were all transitioning to different parts of our lives,” Vega said. “I got married, and we were all getting out of college and moving into real life.” After the breakup of Zlam Dunk, Vega continued to make music, forming a new band, Desert Culture.

“I had a lot of fun in that band, but it wasn’t as aggressive as Zlam Dunk, and it didn’t have the same post punk sensibilities, which was the music I was more interested in making,” Vega said. “That’s what made me start writing the songs that appear on the new record.”

“This album has been a long time coming,” Vega said. “I’ve been working on the songs since around 2016, but when you have a full-time job and a life, music kind of gets put on the back burner. The album has been a long process, with Vega beginning to record the songs in 2018. “I kept slowly working on it until it finally got mastered in January of this year,” Vega said. After that, Vega decided to wait to release the project until after SXSW, so the release wouldn’t be overshadowed by the festival. But with SXSW cancelled and the country on lockdown thanks to the coronavirus pandemic, he decided that now was the time because now he had the time.

You might think that putting out an album when you are well-known math and computer science teacher at a fine arts school might make Vega a little anxious, but he tries to minimize that by reminding himself why he’s making music in the first place.

“I’m always a little bit nervous when I release something new,” Vega said. “But for me, I just try and tell myself if that’s what I want to do, and I like it, I don’t really care what other people think of it.”

For Vega, the music will speak for itself.

“I never wanted to be the band that had to beg for attention,” Vega said. “I just try and focus on having fun, and I’ve found that people respond to that. The new album is deeply personal for Vega, who describes it as a “love letter to that period in my life, and the people who were a part of it.”

As far as songwriting goes, Vega tends to approach music as solving a problem.

“As a drummer and a math teacher, my songwriting process is super logical,” Vega said. “I usually start with chord shapes to try and determine the mood and feel for the song, and then go from there.”

To help balance his logical side, Vega lets his creativity run free when he is writing lyrics.

“Musically I’m very logical, and everything is super orderly,” Vega said “But writing lyrics is where I let myself be more creative and give myself fewer rules.”

Originally, Vega intended to pursue music as a career.

“My major in college was sound recording and technology, so I was actually a music major.”

In his junior year of college, however, Vega had a realization.

“I realized that if I was a recording engineer I would be working 15-hour days, and it’s also not a job you need a degree for,” Vega said. “I think I could’ve done that and had a great time, but I wanted to have a normal life and eventually get married, so I decided that I needed to pivot.”

Vega decided to stick with his original degree plan rather than change majors, and in 2011 he graduated with a degree in sound recording and technology.

It wasn’t until the next year that he stumbled upon his passion for teaching.

“I was working a temp job, when I sort of randomly found out about a program to get alternatively certified to be a teacher,” Vega said.

From there, Vega taught at the Alternative Learning Center, or ALC, for four years.

“That job was honestly a lot of fun, and very eye-opening,” Vega said. “It really taught me to be patient, because I’ve dealt with some of the most difficult students you can imagine.”

While it was a challenge, it also gave Vega an opportunity to grow. “I was able to learn their stories, it showed me that a lot of those kids are difficult because they have a really difficult life, and most of it is out of their control,” Vega said. “It really taught me to be empathetic; all those kids are really great, and so much stronger than I was at their age.”

Although he changed career paths, Vega still tends to think in terms of music.

“As a teacher you come across so many different stories and emotions, and then as a musician, you can try and translate those emotions into a song, and it really helps me walk in their shoes,” Vega said.

Vega’s ability to do that is confirmed by senior Henry Winter, a senior in Mr. Vega’s AP Computer Science class who has had Vega as a teacher for the past two years.

“One of his biggest strengths is that he really listens to students,” Winter said. “He’s very down to earth, and he tries really hard to help his students understand.”

Vega also makes an effort to bring music into the classroom whenever he can. “Whenever we are taking a quiz or a test Mr. Vega always puts on music,” Winter said. “He’s really into music, and I think he has the ability to appreciate a lot of different types of music.”

He doesn’t just appreciate many types of music. He records many different types of music. His latest release, Decade, speaks to his broad music taste. The record opens with “Decade I” and “Decade II,” a raw and emotional tribute to times past, with dark guitar and synth lines backed by a dance-pop influenced rhythm section. On the next track, “Dead Set (Moving Forward),” the tension that was built by the opening tracks starts to release. With booming, grimy vocals set over a heavy, chugging, drum beat contrasting with a melodic synth line that looms ominously in the mix. On the next track, “Foundation,” Vega takes a chance to let his lyricism shine, while he seems to reflects over the changes he’s seen in himself and his surroundings over the past decade. With the second-to-last track, “Salvage,” Vega seems to epitomize all the sentiments expressed earlier in the album, both lyrically and musically. The high-energy drums contrast starkly with the somber lyrics and dark melody created by the bass and the guitar. This contrast creates a very unique sound, and bobbing your head to the infectious rhythm while listening to the vulnerable and emotional lyrics kind of feels like dancing at a funeral. Decade closes with “Heat Depression,” a short, mostly instrumental track that showcases Vega’s ear for melody with a beautiful synth line that sets the perfect tone to end the album. 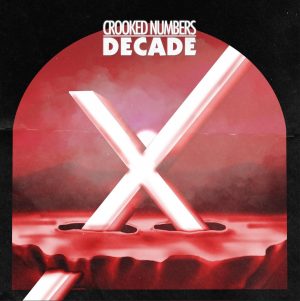 Listening to Decade, it might be hard to believe that Vega was not always an accomplished songwriter. But, like everything, Vega believes it just takes practice. “It takes a long time. I’ve been making music for 17 years and just in the past three years have I really started to get it.” As discouraging as this may sound, Vega sees it as an opportunity. “That really just means you can do whatever you want. You have complete freedom,” Vega said. “Just know that the only way to get better is to keep trying. … Being in a band is one of the most fun things you can do,” Vega said. “Don’t worry about being able to sing, if you have something to say, say it.”