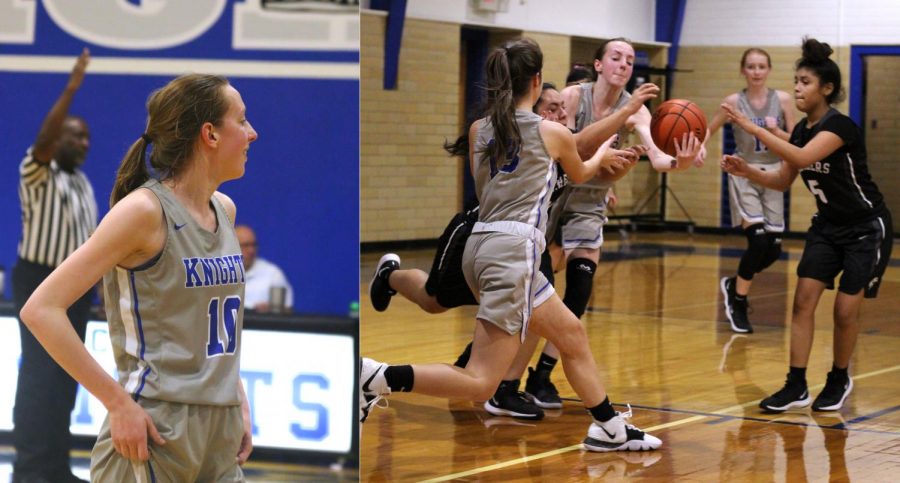 The Shield: How do you balance technical theatre and basketball?

Georgia Harrington: Really poorly. It’s hard, I basically run from one building to the next, but I have to talk to all of my bosses and directors and coaches, so it’s a lot of work.

TS: Which is more time-consuming?

GH: Probably tech because it goes year-round, and basketball is really time-consuming during the winter, but I also played/play other sports, so life is always crazy.

TS: As a senior what are your plans to lead the team and your hopes for the upcoming season?

GH: We are really excited; we are trying to change the culture and how we approach practice. To get started really hard every day and getting pumped up for the season. There is a lot of stuff that we are putting into that like the way we do practice and the way we play games.

TS: What have you learned playing varsity basketball?

GH: I’ve learned a lot, I think it’s a lot about learning about other people not just yourself. You learn how to work and play with others. I’ve played varsity for three years, and I’ve seen lots of different classes come and go. It’s really nice to play with different people, and it’s always changing and learning.

TS: What have you learned doing tech?

GH: Tech is very weirdly similar and different [than basketball]. In tech, I also usually have a sort of leadership role. [Most recently, I stage-managed] the play [Murder on the Orient Express]. It’s the same idea of thinking and figuring out what’s best for the group as a whole and not necessarily the individual.

TS: What was your favorite moment playing basketball?

GH: Honestly, my freshman year because I had a really fun time with the first shows I did. I was friends with a lot of the seniors, and I learned a lot from them. Once, we were all in the dressing room before a show and we were just singing Christmas music, and everyone was having fun, the tech and the actors.

GH: Well, there was this one practice where we were running up and down the court, and we kept turning the ball over, losing it, mis- dribbling or hitting it out. Every time we had a turnover, our coach would add a sprint, so we had to do a sprint for each turnover. There was a catch because if we didn’t finish the sprint within a certain amount of time, we would have to do it again. We ended up having to run 162 sprints over the next two practices. It was hell. That was two years ago, and last year we had to do a wall sit for five minutes, and a bunch of people couldn’t do it, so every time somebody fell, we had to start over. We ended up having to do a wall sit for 15 minutes straight; one girl was crying and one girl threw up. It’s no joke.

GH: Leadership in basketball is different because we are all kinda doing the same things. We are all part of almost the exact same goal. During tech, everyone has very specific roles, and in tech, we have very specific roles. We work together, but it’s more about individuals doing different parts.

TS: Why do you participate in tech theatre?

GH: I do tech mostly because I’m not in the McCallum district, and I thought, “How am I able to attend McCallum” because it’s only like five minutes away from my house. I knew how to build and construct things because my parents are country so I thought I would try tech theatre. I also like having leadership roles where I can direct other people towards a common goal, so it worked out very well. Throughout the four years, I have made peace with it in a way because at the beginning it was so weird because I was surrounded by theatre people who I didn’t know, and I did not fit in with them that well. Now I feel accepted and loved, and I have found a way to make it my own and get what I want out of it.

TS: What was your proudest moment on tech?

GH: Not to toot my own horn but a lot of time things are so close to going wrong, and we are always on the precipice of something going horribly wrong.

My proudest moment was probably the first show I stage-managed which was Our Town my junior year. That one was fun to do because I had never worked with that director before because he was a guest director, Michael Harlan. He was very appreciative of all the work I was doing and it was very rewarding to be able to work with him in that environment.

TS: What was your proudest moment on basketball?

GH: My personal proudest moment on basketball was when we first got our freshmen this year, and they were trying out and Coach Campbell let us coach the freshman for a practice. It felt great because we were teaching them the plays, and we got to help mold the next generation of McCallum girls basketball.

TS: What are your college plans?

GH: I am applying to lots of liberal arts colleges all over the country, and I’m hoping to major in global relations and international health. It’s a very specific major, but I’m looking forward to it, and I have large aspirations for college, but I think I can get there.