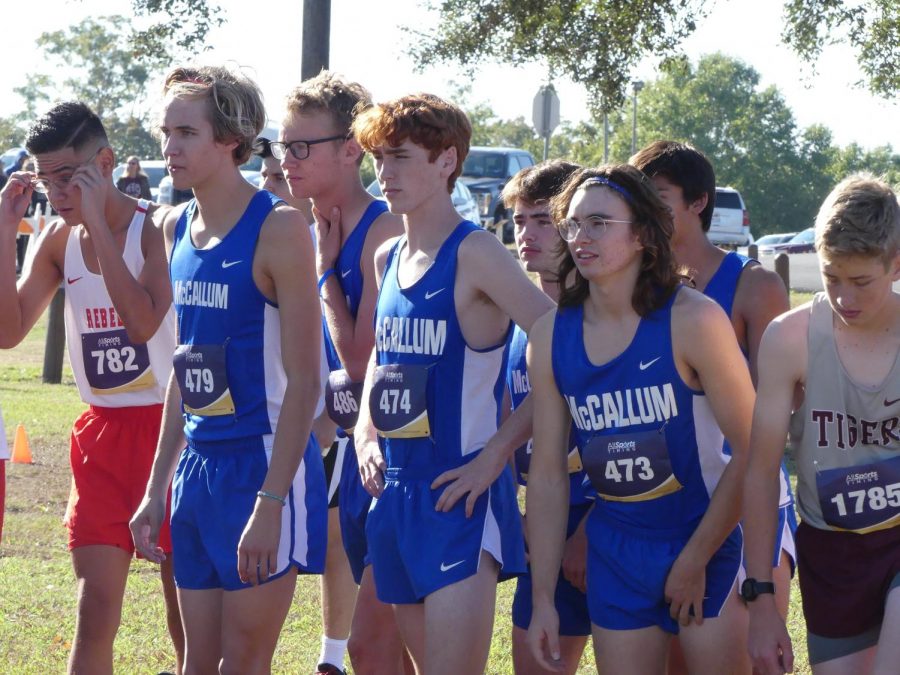 Even though the cross-country season is mostly over, there is one runner who is going where no McCallum man, or student for that matter, has gone before: sophomore Chris Riley. Riley has had a landmark cross-country season, beating his best time from last year by a minute and getting an opportunity to race at State, thanks to his 11th place finish at Regionals on Monday.

One of the major milestones for Riley was his success at the McNeil Cross Country Invitational on Sept. 28. He placed first among 2,000 other 5A runners with a time of 16:43. Leading up to the race, Riley and his teammates had been training hard.

“This was one of the most important meets of the season, so I’ve been running twice a day most days for the past two weeks,” Riley said. “I was pretty nervous because I knew that I was going to place well, but I had no clue I was going to be first. It’s been reassuring knowing that all the work I put in over the summer paid off.”

“I finished 89th out of 209,” Robinson said. “When I crossed the finish line, I noticed my own time and was a little disappointed, but when I saw that Chris got first I was so proud of him and happy to be a Knight!”

But Riley’s top finish at the McNeil Invite hasn’t been his only success. After the McNeil Invite, Riley spent his time continuing the strenuous training he was already doing. Thanks to his training, Riley ran an amazing race at the 25-5A District Championship where he qualified for regionals after placing ninth with a time of 16:34.6.

Just qualifying for regionals, is an amazing feat, much less placing ninth. The last time the McCallum cross-country team made it to regionals, Cash Robinson was a sophomore.

“It was a lot of fun, and I had a great season leading up to the meet,” Robinson said. “It was our second year at regionals, and I wish I would’ve known that we wouldn’t be going back. It was an awesome experience getting to see some of the best runners in the state.”

Riley is quickly becoming one of those top runners, but, on the McCallum team, he isn’t just loved for his athletic ability. His teammates appreciate him because of his innate ability to be a great teammate and cheer on his fellow runners. All of his teammates had only nice things to say.

“Chris is a very gifted athlete who takes running very seriously,” Robinson said. “He has a very strong work ethic and is also very humble, so he never talks about how he did in a race or brags about himself.”
Robinson believes that Riley fits in very well with the feeling of the team, and attributes some of Riley’s success to that.

“As a team, we are all very hard workers who are motivated by our own goals to get better. We also have a strong focus and on race days we are all very locked in waiting to run.”

Leading up to Regionals, Riley was excited but also characteristically humble about his aspirations.
“I’m excited about running a course I’ve never seen before and seeing how much faster I’ll have to get before I’m able to qualify for the state meet,” Riley said. “I’m not expecting too qualify for state but I am looking forward to seeing how I’ll place with a lot of other fast runners.”

Riley’s humility may have been noble but it proved inaccurate. At the meet, Riley qualified for States, with the fastest sophomore time at 16:31.17. After falling in the first mile, he made a huge comeback in the second and third miles to place 11th and achieve a personal best.

“I am so proud of Chris and what he has achieved this season,” Coach Susan Ashton said. “He is my first cross-country runner to qualify for state since I have been coaching.”