First-time high school teacher Vandenberg is all about the fundamentals 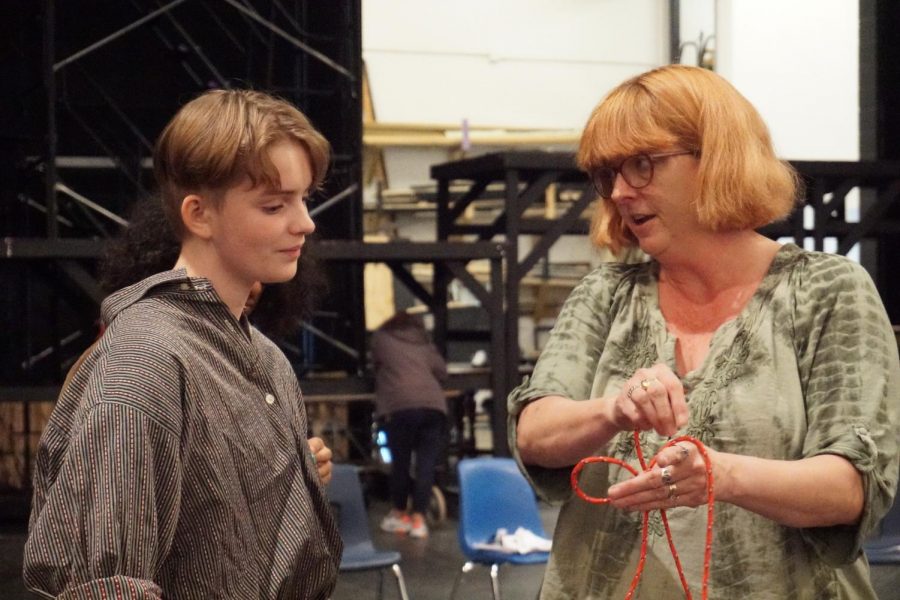 Vanderburg teaches freshman Barret Andrews, a student in her Tech One class, how to tie a variety of knots, such as the trucker and fishtail. Vanderberg spent about two class periods on the basics of tying knots. The lesson plan included how to tie the knots, the purpose of each knot, and when each knot comes in handy. “I wanted to teach the fundamentals,” explained Vanderburg. “Before you can use all the newest programs and state of the art technologies, you have to know the basics.”

From an audience perspective, a theatre show is almost like a movie. Lighting blends perfectly together, creating an instant mood. Microphones and audio are perfectly balanced, allowing sound to flawlessly flow through the theatre. The set, costumes and makeup are so perfectly designed, you forget the people onstage are actors.

Backstage, however, a million and one things are going on to create this picture-perfect show. The ever-changing, ever-growing world of tech theater is hard to master and even harder to teach, but Kristin Vandenberg is more than ready to take on the job.

Kristin Vandenberg is the new technical theatre teacher at McCallum. With years of experience under her belt, she’s ready to spread her knowledge to McCallum’s eager theater students.

During her long, successful career as a technical theatre designer and production manager, Vandenberg worked for national tours, regional theaters and was even the event manager at 14,000-seat arena complex. Twenty years ago, she moved to Austin to open the Performing Arts Center at Texas State University, a state-of-the-art facility.

Over the last 10 years, there’s been substantial turnover in the job that Vandenberg now holds, leading to inconsistent education for students vying to develop their technical theatre skills. Though the range in skill sets of students may be daunting for some teachers, Vandenberg is unfazed. Her singular goal is to help her students grow.

“I’m trying to meet them where they are and facilitate them moving forward from this point,” she said

Alongside teaching six periods of technical theatre, Vandenberg is also assisting in the technical direction of MACTheatrer’s fall show, Jekyll and Hyde. She is responsible for coordinating the technical aspects of the show to make sure the entire process runs smoothly.

“[Supervising] is something I really enjoy,” she said. “It has to do with multitasking and being able to keep different people doing different things simultaneously so nobody gets horribly bored or unproductive.”

It’s worth noting that Vandenberg has a son at McCallum, junior Corin Vandenberg. “Everybody has been like, oh, I bet he hates it,” said Vandenberg. “I’m like, no, he’s the one who made me do this!”

Leaning back in her chair, a smile cracks across her face.

“The funniest part was from the minute I took the job, I told him ‘you can’t take [technical theatre],’”she said.

Though her son was required to take the class for his dance major, Vandenberg explained that she didn’t want the “hassle” of him being in her class. However, things didn’t go quite as planned.

“I’ll be darned if the first week he doesn’t show up and they’ve moved him into my class,” Vandenberg said. “Like, really? Are you kidding me? Now you’re in my class too?”

Though her son, Corin Vandenberg, admits that it’s hard not to call Kristen Vandenburg “mom” in class, he’s genuinely happy that his mom joined the MACulty.

“I really wanted my mom to take this job because I knew that she was a hard worker and very knowledgeable,” stated Corin. “She may seem very professional, but if you ever need anything, she’s a very kind and loving person and will always be there if you need anything.”

There are 145 days left of the school year and Vandenberg has plans to make the most out of every single one. “There’s some areas that will be more challenging for me,” Vandenberg explained, “but nobody can do everything.” Vandenberg is confident in her abilities and is thankful to be surrounded by a group of knowledgeable, supportive peers. “It’s a combination of pulling existing resources and figuring out what I can do myself,” she states.

The school year ahead looks bright, full of new experiences and challenges. As Vandenberg and her students always say, the show must go on.