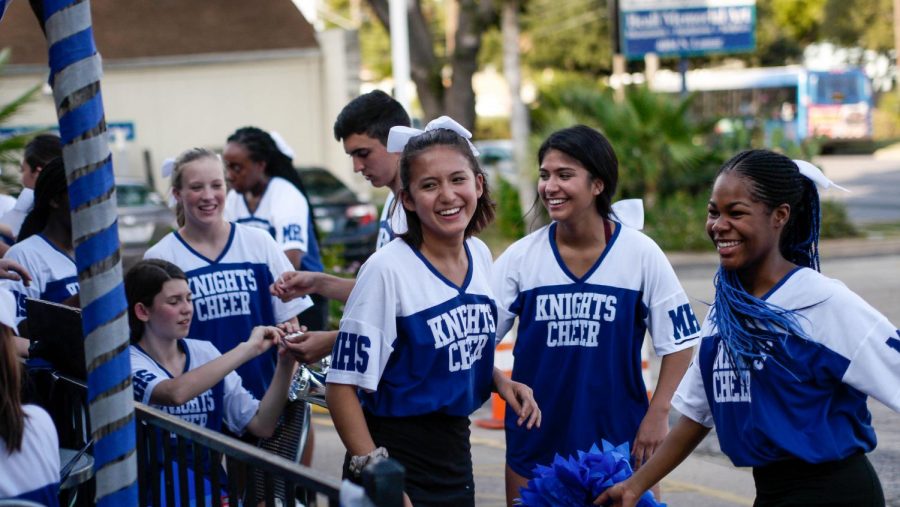 TACO TIME: Cheerleaders decorate the Taco Shack Wednesday afternoon in preparation for the Taco Shack bowl. "The whole Taco Shack experience is just a really jam-packed and the most exciting part of the season," said sophomore Wynter Wilson. "It’s a great kick off to the season and great time for the team to bond." McCallum won the decorating contest.

If you haven’t already noticed from all of the signs around school or daily Macjournalism posts filling your feed, the football season is starting up and one of the most exciting games of the season kicked off last week. The 18th annual Taco Shack Bowl, the traditional season-opening game against Anderson, was Thursday at 7:30 p.m.

One of McCallum’s favorite ways to get the MAC community excited for Taco Shack is by decorating the restaurant. The cheerleaders and Blue Brigade seniors stopped by the Taco Shack on North Lamar at 6 p.m. on Wednesday to completely deck it in blue and gray pride. This included balloons, sparkles, and streamers everywhere, from inside to out. Along with those were ‘Let’s go McCallum Knights’ written on the windows, a banner with flags which featured the names and jersey numbers of all the senior football players, a giant blue ‘M’ displayed front and center of it all, and of course, the Knight in shining armor standing to welcome customers.

“It’s overall just an amazing, exciting experience, especially since it’s my first time being behind the scenes of it all,” sophomore Eugenio Pavon said. “The tradition seems really cool to me because it never fails to get the whole school excited for this one annual event that can really show what McCallum has to offer.”

Of course, this cannot happen without a little friendly competition, so meanwhile, the Trojan cheerleaders decorated their own Taco Shack near the Anderson campus.

People voted for their neighborhood Taco Shack through 6:30 a.m. on Thursday. On the morning of game day, the cheerleaders and Blue Brigade woke up at 4 a.m. to go to Taco Shack for the announcement of the winner.

Last year, McCallum won both the decorating contest and the game.

“Taco Shack is one of the best examples of McCallum’s school spirit,” senior Madison Catalano said. “The whole school gets really into it, but being on cheer is a whole new level. It’s a super stressful week, but it’s so much fun to be able to perform and actually be on the field for the game. The cheer team hypes each other up all week and waking up at 4 a.m. always ends up being worth it.”

With the cheer squad and Blue Brigade cheering them on, the drum line performed and was broadcast live on KXAN this year as part of its 2019 Taco Shack Bowl coverage. Not long after, KXAN and Shack owner Orlando Arriaga awarded Mac the 2019 Taco Shack Spirit Award.

Even though the Knights did not win the game this year, junior Gizelle Perez believes there is more to the friendly rivalry than football victories.

“I would say that I feel lucky to be able to even have this experience in the first place,” she said. “Not many people will get to say that they got to decorate the Taco Shack. I feel that we do this tradition to keep it a tradition, and to celebrate our school and what it means to be a Knight, as well as get the community excited about our football season!”