He’s called ‘Ace’ for a reason

For his second year on varsity, Abraham Dietz embraces new role at the top of the rotation 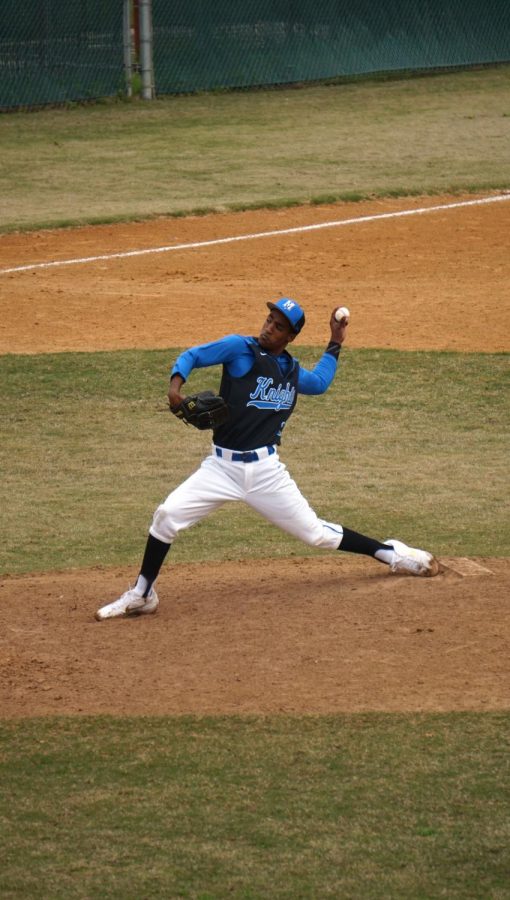 Dietz throws a pitch during the Knights’ alumni game, where the varsity beat the alumns 12-10 to start off their season.

The Shield: When and how did you get started with baseball?

TS: What first caused you to get started with baseball?

AD: I used to play soccer and then I started not liking it so I moved on. My dad wanted me to play baseball because I’m left handed. And then I liked pitching, that was the main thing I liked so ever since then I’ve liked pitching.

TS: When you’re not pitching do you play other positions?

AD: I used to play outfield. I sometimes play right field or center field. And then I bat sometimes, but usually I just focus on pitching.

TS: How long have you been on varsity?

AD: Two years, this is my second year. Our new varsity coach is Coach Grant and last year I was with Coach Alvarez.

TS: How would you say the season’s been going so far?

AD: The season’s been going pretty well, we just have to adjust. We lost a lot of our seniors last year and we have a lot of young players on varsity and we’re learning how to play together.

TS: What’s it been like to have a new coach this year?

AD: I like it because it’s one of the first times I’ve actually had a coach that knows baseball knowledge and in game situations. He knows a lot about pitching and batting and all the stuff.

AD: An individual goal is to have one of the lowest ERAs in the district and one of my team’s goals is to win as a team and to eliminate errors.

TS: So you’re kind of the ace pitcher this year, right?

TS: What’s it like to move up the rotation?

AD: I like it because you can teach. Yzmael (Izquierdo) is the second ace and he’s a sophomore so I like to tell him, ‘this is how you’re supposed to do it, you’re very young at pitching so don’t put a lot of stress over it, just relax and have fun’.

TS: What’s been the highlight of your season so far?