A Shield staff member reflects on the passing of Anderson senior Carson Smith. 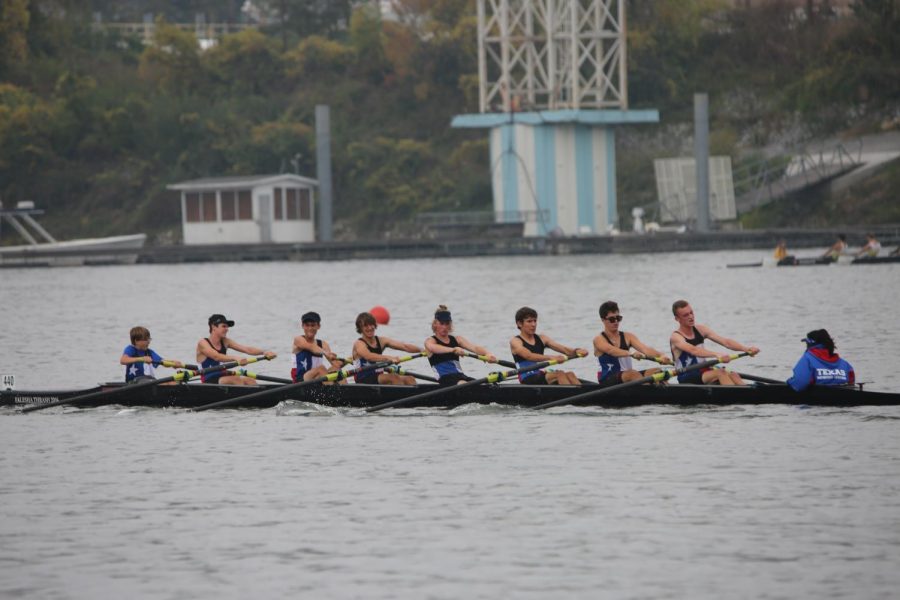 Carson Smith (front) strokes his Novice Eight boat to victory at Head of the Hooch in 2017. Carson was a senior at Anderson High School and a Varsity Rower at Texas Rowing Center before his death on January 27, 2019. Photo by Falesha Thrash.

Until my coach sent out a picture of Carson Smith, I didn’t know who he was. I had been trying to put a face to the name for a day, and this was the first time I actually realized who he was.

So, I didn’t know Carson Smith, and I won’t claim to. He rowed at Texas Rowing Center with me, but, apart from sharing the same club, I didn’t know him. We had never interacted, I hadn’t ever even talked to him. Like most of Austin, I only knew about Carson after his passing on Jan. 27.

Carson Smith was stabbed by two Murchison students (13 and 15 years old) on the night of Friday Jan. 25, and was rushed to the hospital soon after. He was kept on life support for two days, to ensure that his organs could be donated. On the night of Jan. 27, after friends and family had the opportunity to say goodbye, he was taken off life support.

So, I won’t claim to know Carson and I won’t claim that my grief over his death was horrible. I was upset and horrified and stunned, but, again, I didn’t know him. A lot of my friends knew him personally, and they were suffering much more than I was. I cried, sure, and I was understandably upset, but compared to one of my friends who spent the entire weekend in his hospital room with his family, I was faring pretty well.

However, I was still affected by it. Though I didn’t actually know him, we were in the same circles and knew the same people and shared the same space. This happened to someone close to me, someone who I did know about. This time, it wasn’t some random name or face on the news, it was someone who I actually recognized.

Carson was only 18, one year older than me. He was in his senior year, and had been busy playing all kinds of sports and preparing to go to college the next year. He had been applying for college. He had written his college essays reflecting about the meaningful lessons he learned on his grandfather’s ranch. He had been planning for the future, expecting that he would have one going forward. He was legally an adult, one who could vote and join the military, but not one who could drink. He still spent summers with his huge extended family, playing hide and seek with his little cousins, or just picking them up and spinning them around the room.

At the funeral, one of his little cousins started crying at the beginning, when they were showing pictures of him. I tried not to watch, trying to block out both the crying and the pictures, focusing on watching people entering the chapel, knowing that I would, no doubt, start crying if I looked at the pictures of a happy and hopeful teen, one who thought that he had his whole life ahead of him.

His birth mother and her husband have two children. Carson was very close with the eldest one, a little girl he loved unconditionally, but the youngest one won’t remember his older brother. All he will have of Carson, of his brother, of someone who should’ve played a very important part in his life, are stories from his family.

Carson had a huge family, and he loved it. He was adopted by a loving couple, Robin and Doug Smith, who weren’t able to have children themselves. His mother, who was going into medical school and didn’t have the resources to take care of a child, was very open to adoption, and was thankful that her child was going to a good family. It was an open adoption, and Carson was loved unconditionally by both families. He was very close with both of them, and loved spending time with all of his family. They remembered him as a funny and loving child, that family meant everything to. Both families thought of Carson as a gift, and will think of him fondly, even with the circumstances surrounding his passing.

His parents didn’t speak at the funeral. His uncle did, along with the friend that put the Smith’s in contact with Carson’s birth mother. A representative for an organ donor association spoke as well, thanking Carson and his family for their generosity and kindness. Five of Carson’s organs (heart, lungs, liver and both kidneys) are now helping other people live their lives to the fullest.

On the Monday after his death, our whole team, every junior who rowed at Texas Rowing Center, wore royal blue to commemorate his passing, and to show our support for his family in their time of grief. The blue, the brighter of our team’s colors, represented Carson’s sunny and upbeat personality. It was meaningful and emotional to come to practice that day and just see a sea of blue, to see the overwhelming support and respect that our team had.

It seems like some people at McCallum, though troubled by a teens death, majorly dismissed his death, especially with the rumors surrounding his death. Somebody died, someone who easily could’ve been any of us. He was a happy, loving high-schooler, who cared about his family and sports, and was in the process of applying for college. He believed he was going to have a future, and it was brutally taken from him.