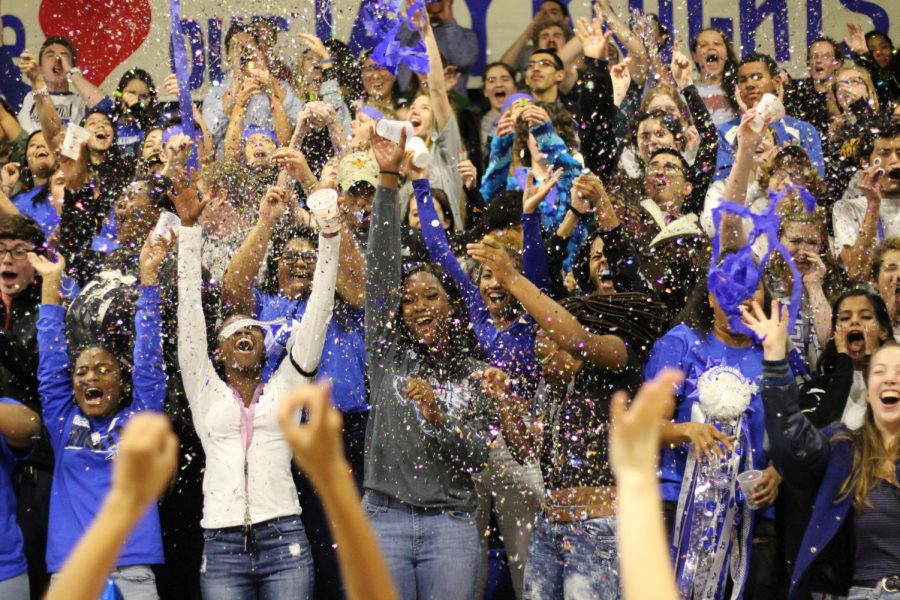 Madison Olsen, Excellent, Student Life Photo. MAKING IT RAIN ON THE RAIDERS: At the homecoming pep rally on Nov. 10, the senior section generates the defeaning volume that would soon win the coveted Spirit Stick for their class. At the conclusion of the pep rally, students showered the class of 2018 with cups of glitter and confetti. “I support my school in everything that I can,” senior Charliee Arnold said. “It was so much fun to get to throw confetti and show school spirit with my senior class, until we had to clean it all up.”

The Texas Association of Journalism Educators announced today that the 2018 McCallum yearbook staff captured 43 individual awards–the most of any school–in the association’s annual Best In Texas Yearbook Contest.

The dynamic yearbook duo of junior Ella Irwin and sophomore Abby Robison led the way among returning staffers by winning five awards for work they did together for the 2018 yearbook. The tandem also won two of the five superior awards, the highest level awarded.

Irwin and Robison won superior awards for two organization stories that appeared on pages that they also designed. The page designs were also among the yearbook entries that won awards. Junior William Wilson was also a part of five winning entries.

Irwin said she was most proud of the work that she and Robison did covering Spectrum, a club that promotes tolerance and provides a safe space for students regardless of gender identity or sexual preference.

“I felt like it was important to highlight the amazing work that this organization was doing to make everyone on campus feel welcome and accepted,” Irwin said.

A group of their fourth-period classmates from last school year–Mira MacLaurin, Lily McCormick and Wilson–earned a superior award for their infograph that appeared on the JV football spread.

2017-2018 Knight managing editor Madison Olsen earned a superior award for her photo of the 2018 Women’s March in downtown Austin. Olsen was a part of 12 of McCallum’s 42 winning entries.

Senior Sophie Ryland, currently co-editor in chief of the Shield newsmagazine, won the final superior award for her story the chronicles how Hurricane Katrina  impacted the McCallum community.

While the big award day was nice, Irwin and Robison both said that winning awards is not why they commit to being dedicated yearbook staff members.

“I love the feeling of working with a team and towards a final end product,” Irwin said. “I feel that in years to come I’m going to be proud looking back on all the hard work that I’ve done.”

“I really enjoy everyone on the staff and getting to create something that the whole school gets to see,” Robison added. “The awards are just a nice bonus.”

All of McCallum’s TAJE Best in Texas yearbook winners are listed below: